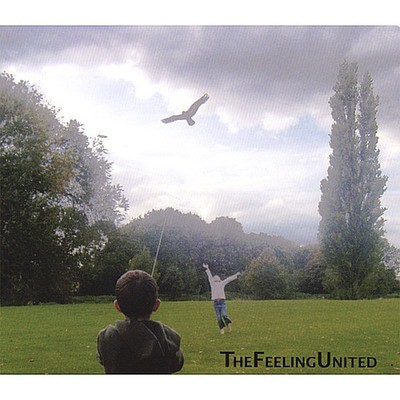 The name really does say it all. The Feeling United is a Toronto-based modern rock four-piece whose genuine camaraderie and positive internal chemistry seems destined to take them far. Their self-titled first album is the sound of a band in it for all the right reasons. They're not novices, but have rediscovered a youthful passion and enthusiasm that serves as a perfect complement to their well-honed skills as players, singers and songwriters. A real diversity exists within their unified front. Each member has different musical backgrounds and tastes (from classical and jazz to metal and electronica), and this helps account for their refreshingly eclectic and wide-ranging sound. The Feeling United have pledged not to confine themselves to one rigid form, and so have left all doors open for their future musical explorations. As Brendan Michie (vocals, piano, guitar) explains, "No-one is afraid to put any kind of style on our stuff. This allows us any avenue without it being fractured and all over the place. There are threads through everything, but we like to leave it open. I'm excited by the fact I can't tell people what we sound like. You have to listen to it." Drummer John Pacheco agrees, noting that "what is on the record is very much a representation of where we'll expand and grow. It is everything we want in a platform to build from. None of us want to get bored. We have all been playing for long enough and in such different musics, and that is just part of our personality." To record The Feeling United, the band set up shop with engineer Lorne Hounsel in famed Toronto studio Signal To Noise. Together they have crafted a resonant work that speaks with true emotional eloquence. From such gently haunting keyboards-driven ballads as "Spatial Encounter" and "God Is The Water" through the pulsing and irresistibly melodic "Shoot Shoot," the restrained anthem "We Need More Light," the hard-driving "Your Love Is Laced" and the cinematic opening instrumental "Coma" (a tune Sigur Ros would be proud to claim), The Feeling United is a multi-faceted album that reveals extra layers with every spin. The roots of The Feeling United can actually be traced back to a Blur concert in Kitchener in 1996. That's where the band's two writers and singers, Brendan and guitarist Nicholas Porter, then still teenagers, first met. "I remember sitting in the back seat on the way back, chatting and going 'you play guitar? So do I,'" recalls Nicholas. The dynamic duo became fast friends, playing and recording songs together, before taking divergent routes. "We actually had a bit of a falling out, and then, to mend a bridge, we decided to help each other out on our solo stuff," says Porter. "About halfway through, we were having a drink, and both went, 'what the f*** are we doing?' Why don't we do this as a joint album?'" "We were doing double work for half gain," adds Michie. Their different musical skills (Brendan on keyboards and guitar, Nick on guitar) meshed perfectly, so forming a band together was the next logical step. In 2003, High Water Mark was launched, a group that made it's own mark on the Toronto scene, attracting large crowds to such clubs as the El Mocambo and The Rivoli. That group disbanded when, according to Brendan, "Nick and I realized we had to go with people more on our wavelength. That's when bassist Gary Toporoski and John came along." Nick had produced a demo for one of Gary's earlier bands, while Johnny and Gary had played together in a hard rock band, Surface Underground. "I just wanted to be part of a band with such unquestionably strong songwriting," Gary explains. "Plus we could hang!" This rhythm section has added a real muscularity to the sometimes gentle and atmospheric sound of The Feeling United, as Michie observes. "It is tighter and heavier and the quieter parts are more beautiful. It just broadened the spectrum of what we are capable of." There is now a true group dynamic and identity in TFU, as opposed to a collaboration between two singer/songwriters. "Before, it was almost separate halves of an apple, but now songs go through the band and become whole," Brendan explains. "In writing, we are figuring out it is best to bring unmoulded ideas to the table and have everyone bounce it around. That's when the best stuff comes out." Porter and Michie acknowledge that they've both been most influenced and inspired by British bands. "There's a great pop sensibility in British music," notes Brendan, while Nick chimes in that "melody is the master there." They come by their influences honestly, given that Nick's parents are from England, while Brendan's dad is from New Zealand, via Scotland. They both profess a love for bands ranging from the Beatles to Joy Division, Blur, The Cure, Swervedriver and The Stone Roses United they now stand, and they demand your close attention.