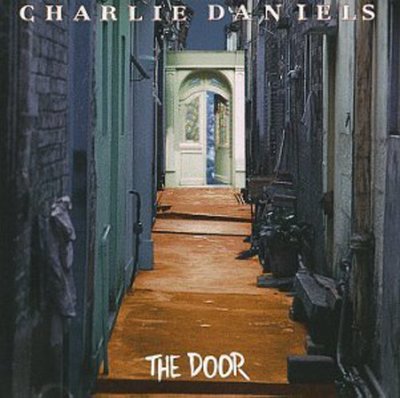 Personnel: Charlie Daniels (vocals, guitar, mandolin, fiddle); Bruce Brown (vocals, guitar); Carolyn Corlew, Joy Gardner, Christ Church Choir (vocals); Taz DiGregorio (keyboards); Charlie Hayward (bass); Jack Gavin (drums, percussion). Recorded at Twin Pines Studios, Twin Pines, Tennessee; Quad Studios and Sound Stage Studio, Nashville, Tennessee. THE DOOR was nominated for Best Southern Gospel, Country Gospel or Bluegrass Gospel Album in the 37th Annual Grammy Awards. Charlie Daniels recorded a handful of country gospel albums in the '90s (1997's STEEL WITNESS was nominated for a Grammy). THE DOOR was the first of these albums, less vengeful and apocalyptic than STEEL WITNESS-which features songs like "It's Payback Time"-but similarly no-nonsense in it's message, with songs like "Washed in Blood," "Jesus Died For You," "Praying to the Wrong God," and "Lay It on the Line. "Daniels' voice, not his fiddle, is dominant here, with backing from the Christ Church Choir. The album closes with the 14-minute suite "The Jerusalem Trilogy," which has five parts.

Here's what you say about
Charlie Daniels - The Door.