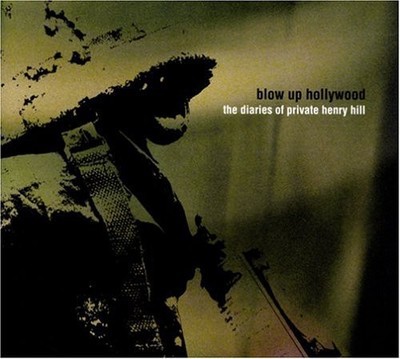 Blow Up Hollywood's third studio album, 'The Diaries of Private Henry Hill' is based on the journals of a young soldier who died tragically in the Iraq War. This concept album narrates a first-hand account of the transformation of a real man from citizen to soldier to killer to martyr. The Diaries of Private Henry Hill is Blow Up Hollywood's follow-up to the critically heralded 2004 album 'Fake', for which Amplifier Magazine touted, "For fans of Radiohead, solo-Dave Gahan/Martin Gore, and Messrs Waters, Gilmore, Wright and Mason, Fake is the real deal." Founded in 2001, Blow Up Hollywood have built a tremendous following, especially impressive given their anonymous tendencies and strict independence. Selling their albums exclusively online, Blow Up Hollywood has sold over 25,000 units to date. This critically acclaimed outfit compelled CMJ Magazine to state, "In name and art, this New York collective is a response to a culture that values style over substance." Furthermore, according to The Village Voice, "[Blow Up Hollywood] mine a swooshy sort of ornateness that might be rooted in Pink Floyd, Radiohead, or Porcupine Tree: leaden emotion amid promising open spaces.' Blow Up Hollywood is the collaboration of nine New York musicians. They chose their moniker as a backlash to the excess of glitter marketing in media. Together the band creates a huge orchestral wall of sound with blissful string arrangements and poignant vocals making each track a requiem. As the All Music Guide described, "Like gray clouds hanging low on a fall Sunday afternoon, occasionally pierced by hopeful moments of sunshine that never seem to last, this music is downright overshadowing and all-consuming yet, in a subtle, gentle manner, somehow comforting." The band's live show is a mixed media event incorporating self-produced films projected on giant screens while the band scores the movie live, almost secretly in the dark. A musical, cinematic and theatrical experience not to be missed. Reveiws: A concept album built around the true-life diaries and letters of a young U.S. serviceman killed in Iraq, The Diaries of Private Henry Hill is one of those rare (too rare, considering how many of the things there are out there!) thematic offerings that is as impressive in execution as it was in conception. Blow Up Hollywood frontman Steve Messina first heard of Hill when the young man's bereaved father walked into the homeless shelter that he, Messina, was running. They talked, of course, of war and loss, but it was only when he was loaned the soldier's own writings that Messina comprehended the true nature - and horror - of the war. The result was a collection of songs and themes that neither support nor attack the conflict, but simply show it from the point of view of the people who are actually there: the only people, in fact, whose opinions on the rights and wrongs of the war actually matter. Musically, it is easy to compare Private Henry Hill with latter-day Pink Floyd, if they hadn't gone so horribly off-course with and after The Wall. Of course, the theme is one that is likewise dear to Roger Waters' heart, but more than that, the performance possesses that same sense of gut-wrenching drama that was the hallmark of Waters' most effective compositions. Lyrics are forthright and to the point, but they are also sparingly used - the album is at it's best when the instrumental passages paint the pictures in your mind, with the occasional well-chosen sound effect to hammer home the precise time and place. Such comparisons, however, are also a cop-out - Private Henry Hill deserves to be viewed alone, heard in isolation, and appreciated within the nightmarish darkness of the shell-torn foxhole in which Henry Hill wrote his original words - and in which countless thousands of other, unknown Henry Hills are still writing their own. Thanks to the Internet, the Iraq War has already established itself as the most literate conflict the world has ever seen. More albums like Private Henry Hill could also see it become the most musical. Allmusic.com - by Dave Thompson.

Here's what you say about
Blow Up Hollywood - Diaries of Private Henry Hill.