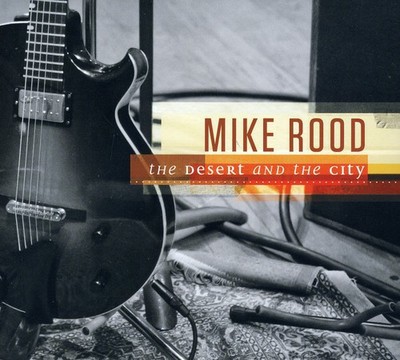 'Mike's sound on the guitar is rich and beautiful, and his compositions are thoughtful, colorful, sensitive and dynamic. He has assembled a quartet of young, like-minded and gifted players that also share his sensitivity, subtlety, and appreciation of tonal shadings and rhythmic variety. It is unusual to hear a debut recording from a young musician that has this level of lyricism, maturity, and is this well recorded.' - John Patitucci, The Desert and the City liner notes. Born into a musical family, Mike has always been immersed in music. He has been playing guitar since he was 7 and his early influences include Stevie Ray Vaughan and Jimi Hendrix. Mike also studied classical piano for 13 years, performing in dozens of recitals and competitions. He won the Nicolas Flagello piano competition in 2000 and 2001. Drawn to improvised music from an early age, studies with legend John Patitucci during late high school sparked Mike's interest in jazz. A self-taught guitarist for 10 years, during the last several years, Mike has studied primarily with Bruce Dunlap, John Patitucci, Adam Rogers, Vic Juris, Jamie Begian and Ethan Mann, and also with Marc Copland, Kenny Werner, Claudia Villela, John Abercrombie and Oren Fader. Mike recorded original music on multiple occasions with renowned producer Bob Thiele in Los Angeles; those recordings led to his national television debut in 2004. In 2007, Mike performed original compositions at the Pelham Music Festival, at Weill Recital Hall in Carnegie Hall, and at Bruno Walter Auditorium in Lincoln Center. Mike currently leads The Mike Rood Communion, which performs avidly in the New York area and has featured such musicians as Mike Bjella, Colin Stranahan, Rick Rosato, Chris Tordini, Tommy Crane, Alex Spradling, Goh Izawa, Arthur Hnatek, Rogerio Boccato, and Glenn Zaleski. The group has appeared at such New York venues as Iridium, Fat Cat, Tea Lounge, Puppets Jazz Bar, Spike Hill, Sweet Rhythm, The Triad Theater, Shrine, and The Living Room, as well as GiG Performance Space, Vanessie, and Vernon's Jazz Club in New Mexico, and the Bern International Jazz Festival in Bern, Switzerland. Since it's formation in 2008, the group has developed a captivating and provocative sound and style, with influences ranging from contemporary jazz, classical chamber music, progressive rock, and an array of world musics.

Here's what you say about
Mike Rood - Desert & the City.