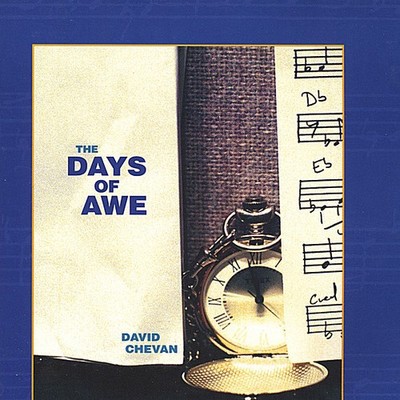 'Drawing on a wide range of styles, including Latin, funk, and blues, Chevan has forged a new body of Jewish music that can be enjoyed on many levels - as the artistic and creative statements of the composer, musicians and improvisers; as a meditative aid to cheshbon hanefesh, the individual spiritual accounting that is the work of the Elul period; as modern midrash or elaboration of ancient Jewish texts; as a terrific addition to the growing body of experimental works fusing Jewish and non-Jewish musical influences; or simply as some of the best jazz you're likely to hear all year.' -- Seth Rogovoy, author of 'The Essential Klezmer' This is bassist and composer, David Chevan's first solo album. The recording is a collection of instrumental interpretations of traditional music for the Jewish Holy Days of Selichot, Rosh HaShanah and Yom Kippur. The centerpiece of the album are six original arrangements of transcriptions from the recorded High Holy Day cantorial repertoire of the legendary Yoselle Rosenblatt. This album is a groundbreaking work if only because it is the first time that a jazz musician (or any instrumental musician) has ever made a recording solely devoted to the music of the Jewish High Holy Days. Accompanying Chevan on much of the album is his working group, The Afro-Semitic Experience including Alvin Benjamin Carter, Jr. on drum set and hand drums, Baba David Coleman on hand drums, Mixashawn.com on tenor sax, Will Bartlett on tenor sax and clarinet, Stacy Phillips on lap steel guitar, acoustic resonator guitar and violin, and Chevan's long time partner and collaborator Warren Byrd on piano. On the remainder of the album Chevan has put together a trio featuring himself along with trumpeter Frank London, a founding member of the legendary Klezmatics, and Afro-Semitic member and Grammy award winning dobro master Stacy Phillips. For those who may be unfamiliar with Jewish religious practice, the Days of Awe is the period of time beginning with Selichot (about a week before Rosh HaShanah) when Jews traditionally spend time reflecting on their actions of the past year, repent for their sins, and seeking forgiveness from those whom they have wronged. This period culminates with the holy day of Yom Kippur, a day of repentance during which one spends the entire day in a state of repentance, self-abnegation and fasting. Most important to this album is Chevan's incorporation and interpretation of the ancient Jewish traditional of cantorial singing known as Hazzanut. Hazzanut or Chazzones as it is also known is a singing tradition that is at the root of most Ashkenazic (Eastern European) Jewish music. The Jewish cantors chanting in the synagogues of Europe were influenced by a distinct mixture of Middle Eastern, Mediterranean and Eastern European scales and melodic figures. The cantors, known as Hazzanim, would use these figures and scales to improvise spontaeous original melodies in prayer to God. They often used krechts, or sobbing sounds and other distinctive vocal techniques in their hazzanut to bring the prayers to extraordinary vocal heights. This music, in turn, influenced later more secular Jewish musical traditions that have become better known to the American mainstream as Yiddish song and Klezmer. Every piece on this album is infused with and informed by this ancient singing practice. David Chevan is the first-born son of a family of first-generation Jewish immigrants from Poland and Russia. He was musically active from an early age and grew up in a Conservative-Egalitarian Jewish synagogue where he led services from the age of 10. Although much of his performing method on the double-bass has been self taught, Chevan credits the master bassist, Lisle Atkinson with showing him the pathway to self-education. As a composer Chevan has primarily focused on works for improvisors. He has written works for a wide range of artists and ensembles, including several collaborations with dance and film. He is a critically acclaimed musician whose work has been compared favorably with Charles Mingus and Rahsaan Roland Kirk. In addition to performing regularly in a duo with pianist Warren Byrd and leading their group, The Afro-Semitic Experience, Chevan has had the opportunity to perform and record with a wide range of creative musical artists, including Ali Ryerson, Joe Beck, Jaki Byard, Harold Danko, Ellery Eskelin, Giacomo Gates, Frank London, Andrea Parkins, and Cookie Segelstein. He is an Associate Professor of Music at Southern Connecticut State University in New Haven. He holds a Ph.D in Music History from C.U.N.Y. and has published numerous articles on the history of early jazz, developed and taught courses on Jewish and African-American musical traditions and is currently studying the music of bassist Milt Hinton as well as a comprehensive study of Jazz Fake Books.

Here's what you say about
David Chevan - Days of Awe: Meditations for Selichot Rosh Hashana.