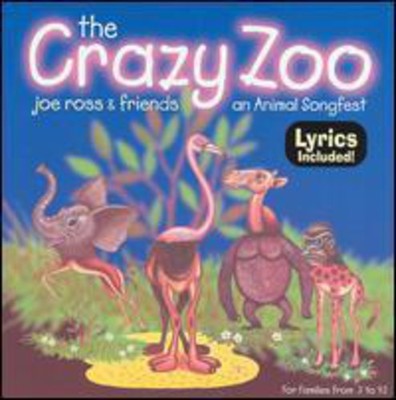 In his liner notes, Joe Ross says, 'Musicians should periodically think about how they hear and feel music, and we must also be able to help others feel it. Thus, my personal reflection on this concluded that my own music is fun, playful, and even silly at times.' On 'The Crazy Zoo: an Animal Songfest,' Ross' goals are to both entertain and educate, by getting audience members to interact, clap or sing along. 'I've always tried to have fun with music, and this is what this album tries to convey. Everyone should experience the joy and unity that playing and singing together bring.' Ross is a member of the Northwest on Tour juried artist roster and frequently performs for family shows and festivals throughout the region. 'The Crazy Zoo: an Animal Songfest' offers a number of songs from the genres of bluegrass, folk, campfire songs, Celtic, children's music, and original music. Ross admits that it began as a project for kids but evolved to become something more. 'We think that folks of all ages should like these frolicking, fun-filled family songs that will have you singing, smiling and tapping your toes from the first verse of 'The Cat Came Back' on.' Besides cats, the album offers tunes about bears, unicorns, dragons, ducks, horses, dogs, whales, crawdads, turkeys, and foxes. Ross' original title cut, 'The Crazy Zoo' tells of other interesting animals, like the zepotamus, hippoingo, elezelle, pypard, goraffe, osthon, flammel, kangarich, and babkey. The album's cover has whimsical depictions of these imaginary animal species. On a more serious note, Ross' other original on the album is 'Touch the Earth' which speaks to the frustration, desperation and despair experienced by Native Americans as they saw their resources exploited by the pioneer emigrants. The song, written from an Indian's perspective, encourages us to 'Arise now and touch the earth, before your day is done!' The 19-track album is targeted 'for families from 3 to 93,' and includes all the lyrics for nearly an hour's worth of music. Multi-instrumentalist Joe Ross plays guitar, upright bass, and synthesizer on the project. Vocals and harmonies are handled by Ross and Bob Evoniuk. Artists collaborating with Ross on the project include: Bryan Bowers on autoharp & mandocello Linda Danielson on fiddle Bob Evoniuk on resonator guitar Dean Magraw on guitar Dan Mazer on banjo Janet Naylor on celtic harp Peter Ostroushko on mandolin Radim Zenkl on mandolin, bouzouki, low whistle Kathy Boyd of Portland, Oregon comments, 'It's one of the most professionally packaged products I've seen in a long time. We listened to 'Zoo' last evening while eating dinner.... By the time the banjo was introduced, it was quite a pleasant surprise! We were all dancing around the house snapping our fingers in a Stray-cattish sort of way to the very first song on the album, and that was just the beginning of the fun we had. Tom's daughter got excited everytime you sang a song she was familiar with. The adults had an unexpected trip down memory lane when we got to sing-a-long with songs such as 'The Unicorn' and 'Joy to the World (Jeramiah Was A Bullfrog).'