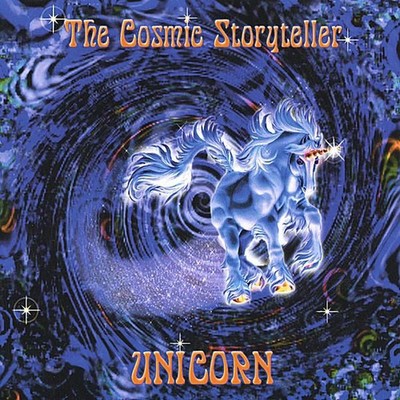 (featuring Unicorn and guest musicians from Steppenwolf, the Association, Rick Nelson's Stone Canyon Band, Spirit, Hal Blaine's Wrecking Crew, Ray Charles Orchestra, Marvin Gaye Band) 'One of my favorite '60s groups'-Michelle Phillips. 'An enjoyable listen, a well-crafted and ambitious project...lyrics flow with a finely-honed, literate grace and grandeur...philosophical...a classy sense of spirit and style...powerful....with muscular vocals...'-All Music Guide. 'It sounds like hit radio the way it used to be!'-music executive Harold Childs (A&M, Warner Bros., Polygram, Qwest). 'With it's theme of the transcendence of creativity, The Cosmic Storyteller voices the hopes, joys and sorrows of love, and concerns that belong to every generation...'-Rock City News 'It fits squarely in the reawakening by radio to music that crosses over to wider audiences.'- Mark 'In The Dark' Shands, Music Director, DMX Music (on over 800 cable systems) Unicorn is also the subject of a forthcoming documentary that tells the band's tumultuous story and features many '60s pop icons such as Michelle Phillips, The Lovin' Spoonful, Barry McGuire, Scott McKenzie, Hal Blaine, Moby Grape, and the Electric Prunes. Once upon a time there was a band named after a magical, mythical creature: Unicorn. Like the namesake, it disappeared into the mists of time and waited to be found again by those who love the strange and beautiful.... The Cosmic Storyteller (1967), Unicorn's masterpiece concept album, was thought to be lost forever and languished in a vault for over 30 years without having ever been released. Thanks to the chance discovery of the master tapes, and the wonders of today's digital wizardry, you are about to discover a new dimension in entertainment. With it's theme of the transcendence of creativity, The Cosmic Storyteller voices the hope, joys and sorrows of love, and emotional and philosophic concerns that belong to every generation. Springing anew out of classic rock creativity, it is a cornucopia of American styles, a luxurious, poetic tapestry performed with unity of purpose and verve. Now you can revisit that golden era. Come, stimulate your imagination and experience the genius of Unicorn's revolutionary The Cosmic Storyteller, a concept album as relevant today as when it was first made.

Here's what you say about
Unicorn - Cosmic Storyteller.