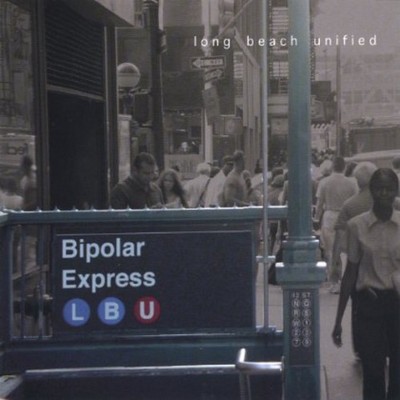 LBU has always been a work in progress. Officially formed in the summer of 2002, the idea of Long Beach Unified has been around much, much longer. Somewhere in the haze of the mid 1990's in the town of Long Beach California, an extended group of young friends, rascals, assholes, and acquaintances began hanging out and drinking their parents' beers in various garages, backyards and living rooms across town. Luckily, a few of them knew how to play instruments. Enter Pat Schlauch, and Charlie Davis-childhood friends who always ended up forming bands that were shitty and questionably tuned at best. The Trouser Trouts, Sloth Loves Chunk and Tommy Africa were just a few of the lowlights. Sometime during this ongoing game of band musical chairs, Mr. Schlauch began jamming with long time friend/drummer Jack Hale in his parents' living room. They had tried jamming with other players, but could not find the right piece to the puzzle, the right tool for the job. This tool was Charlie Davis-and boy was he a real fucking tool. After enlisting the services of Mr. Davis, these lads began jamming and writing songs. After spending a few years playing in people's backyards, they reached their peak of neighborhood stardom. They thought they had finally made it and could not ask for anything more-except for maybe a singer and a lead guitar player. Chris Caplan, a close friend of the band, seemed like a logical choice. What he lacked in personal hygiene, he made up for in his ability to play the living shit out of a guitar. He also added a fresh take on the old songs. In the summer of 2002, the four of them began rehearsing in Schlauch's garage on a regular basis and even scored their first gig a few weeks later. Now all they needed were some vocals and maybe even some lyrics. After scouring the earth for a lead singer, they ended up recruiting Cameron Deeds, which was convenient because he had been hanging out in Schlauch's garage the whole time anyways. At last, the line up was complete. The planets had become aligned and these five lads were ready to take on the world. The band had an extremely loyal following from the start. And the chaos of their live shows soon became legendary. Drawing upon different musical styles, it is hard to fit Long Beach Unified in any particular category. Nonetheless, there is distinct sound-a group of childhood friends who just wanted to make music that sounded good to them. After spending some time in the recording studio, they have now released their debut album, The BiPolar Express.

Here's what you say about
Long Beach Unified - Bipolar Express.