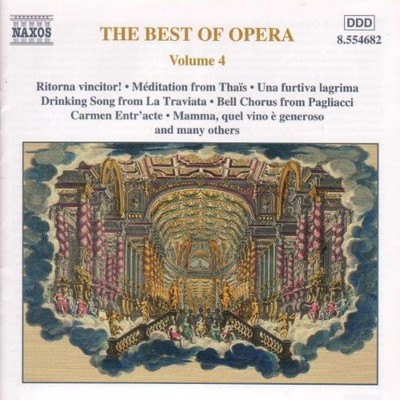 The first volume of the Naxos selection of operatic excerpts includes music ranging from Mozart to Puccini. The first of these composers is represented by the famous aria of the Queen of the Night from The Magic Flute. Mozart had settled in Vienna, independent of a patron and of his father's guidance, in 1781. Ten years later, after variable successes, his fortunes seemed about to take a turn for the better. In 1791, the year of his death, he w rote two operas, the coronation opera La clemenza di Tito for Prague and the German Singspiel Die Zauberflöte (The Magic Flute) for a suburban theatre in Vienna. The latter was still running at the time of his death in early December. The opera, imbued with Masonic symbolism and with a libretto by the actor-manager Emanuel Schikaneder, who took a leading comic role in the work, deals with the ordeals and initiation of Tamino and his earthier companion, the bird-catcher Papageno, into the mysteries of enlightenment and his final union with Pamina, daughter of the Queen of the Night. In the first act of the opera the latter appears to Tamino, seeking his help in the rescue of her daughter from Sarastro, whom she brands as evil, although it later transpires that he is the leader of the enlightened band into which Tamino is eventually admitted. In Der Hölle Rache she declares, in brilliant coloratura, her enmity to her former consort Sarastro.

Here's what you say about
Various Artists - Best of Opera / Various.