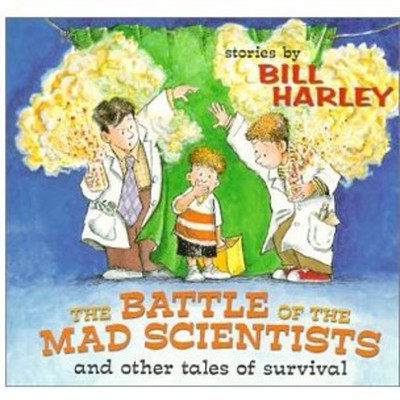 "Bill Harley has the uncanny ability to reaffirm life for listeners, be they five or fifty. Humor, empathy, intelligence and reality all radiate from his work and from him." - Penguin Books A GRAMMY® award winning artist, Bill uses song and story paint a vibrant and hilarious picture of growing up, schooling and family life. His work spans the generation gap, reminds us of our common humanity and challenges us to be our very best selves. A prolific author and recording artist, Bill is also a regular commentator for NPR's All Things Considered and featured on PBS. Harley joined the National Storytelling Network's Circle of Excellence in 2001 and tours nationwide as an author and performing artist. With these considerable talents, Bill considers his real work to be using these skills to encourage his audience to see the world anew by experiencing "live art", to honor theemotional lives of children and adults and finally, to pass along a love of language and music. Praise for Battle of the Mad Scientists: 'As always, Harley's witty ebullient performance will have listeners young and old laughing out loud.' Publishers Weekly 'It's not for the straight-laced, but like all of Harley's work, it is disarmingly honest and a true snapshot of childhood. Bill Harley's never forgotten the day-to-day reality of being a kid, and it's one of his greatest assets.' Billboard 'In 'The Battle of the Mad Scientists,' storyteller, songwriter and National Public Radio humorist Bill Harley spins more of his vivid, funny stories from a kid's point of view, but that doesn't mean adults won't get a kick out of them too.' Los Angeles Times 'Bill Harley's been telling tales now for more than twenty years---and he gets paid for it! Go figure. Or better yet, go listen.' LA Parent Magazine Hi!! I am a big fan of your stories. I am 8 years old and I am living in Norway for a year. I can recite almost all of The Great Sled Race!! I really like Philip in The Battle of the Mad Scientists. YOU ARE THE BEST! I had better stop writing now. I hope this gets to you! Lena Hello again Mr. Harley It's Walker S. It was a joy meeting you. Thank you for signing my cds, I've already listened to them like 40 billion times. I LOVE THEM. The best story I think is the 'Enny Beeny Teeny Ghost' and 'The Battle of the Mad Scientsts.' Please come visit us soon, Walker S.

Here's what you say about
Bill Harley - Battle of the Mad Scientists.