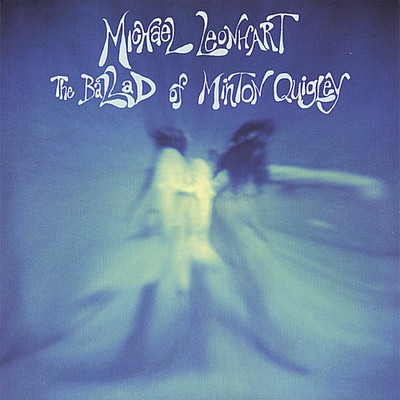 Michael Leonhart releases 'The Ballad of Minton Quigley', a self-produced and recorded album of original songs, in July of 2006, featuring Michael as vocalist and multi-instrumentalist. 'The Ballad of Minton Quigley' mixes orchestral pop (the Beach Boys, Serge Gainsbourg), 60's classic rock (the Beatles, Velvet Underground), folk singer-songwriting and dreamy organic electronic soundscapes. The album features Michael playing a wide variety of instruments accompanied by the band with which he has performed since early 2005, with the addition of strings, brass and woodwinds on a few tracks. Born into a musical family, (his father is jazz bassist and singer/songwriter Jay Leonhart), Michael Leonhart has developed into one of the most imaginative musicians of his time, sought throughout the music and entertainment world as a trumpet player, singer-songwriter, producer, multi-instrumentalist, composer, and arranger. Michael has performed with Steely Dan since 1996, recording two albums with them, including 2000's Grammy winning Album of the Year 'Two Against Nature' on which he was a featured performer, arranger and conductor. He has performed and/or recorded with such diverse artists as A Tribe Called Quest, Bill Frisell, Bonnie Raitt, Brian Eno, Busta Rhymes, D.J. Spooky, David Byrne, James Brown, Joshua Redman, Mos Def, Natalie Merchant, Q-Tip, Raekwon (Wutang Clan), Slash (Guns and Roses/ Velvet Revolver), Steven Tyler (Aerosmith) and Wynton Marsalis. In 2004, Michael toured worldwide with Lenny Kravitz supporting his most recent album, 'Baptism.' Michael has composed and performed music for movies, television, dance, fashion shows and theater, and has appeared on over 75 albums. At age 17, Michael was honored as the youngest Grammy recipient in history, cited as the most outstanding musician in a U.S. high school. That same year ABC World News named him 'Person of the Week' Michael will be touring the US this summer with Steely Dan featuring Michael McDonald.

Here's what you say about
Michael Leonhart - Ballad of Minton Quigley.