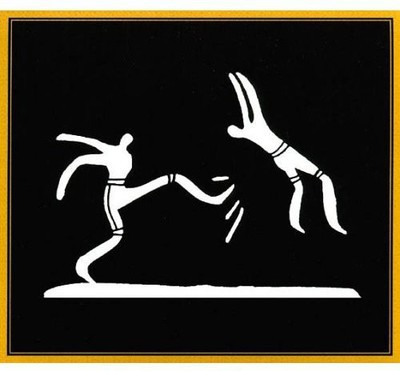 Known mostly for it's tobacco, basketball and barbecue, NORTH Carolina is starting to add to it's list quite a resume of great singers. Let's see..there's Clay Aiken and Fantasia Barrino, uhhh....James Taylor and uh.... oh forget it...I can't think of any more. But there is a great Little Rock and roll band from NORTH Carolina . The singing ain't much to talk about but the songs are great and damn! They can rock! Led by drummer, songwriter (of such top 40 hits as 'Battleship Chains' -Georgia Satellites and 'I Love You Period'-Dan Baird) Terry Anderson, The Olympic Ass-Kickin' Team take pride in their no-slow-song approach to not only taking the stage but attacking it, with hardly a breath from one tune to the next. In the tradition of singing drummers such as Mickey Dolenz, Levon Helm and whoever that guy in Night Ranger was, Terry spits out hilarious rapid-fire lyrics while simultaneously keeping the beat and sometimes even a straight face. Playing with Terry since 1978, (and with hair like an unmade bed!) Jack Cornell's loping bass parts make this one of the tightest rhythm sections you'll ever hear and his backup singing adds syrupy sweetness to the melodies. Big Daddy Dave Bartholomew (sometimes seen on guitar, bass or drums with Caitlin Cary, Rob Watson and/or The ViBeKiLLeRS) adds a bed of rock solid guitar much like Keef does for the Stones and with Scotty Miller (former Six String Drag-er) slapping Tele parts just across the stage you'll break your neck tryin' to decide which guitar super hero to keep your eyes and ears on. All they need is some fool on the side ticklin'and poundin' the piano keys, and wouldn't you know it...Greg Rice (Cartridge Family) has already taken that job and deserves a raise! In a world of lullaby rock and sensitive songwriter dude, a good 'ol dose of Rock and Roll is needed every once in a while to remind you why the good Lord gave you feet...for dancin'! ...and that's courtesy of NORTH Carolina ! Mention great live rock and roll bands, and the conversation usually flows towards the usual suspects: Rolling Stones, Faces, Rockpile, and NRBQ. But the REAL best live rock and roll band in the world at this moment in time just might be Terry Anderson and the OAK (Olympic Ass-Kickin') team. Case in point: you get ace singer-songwriter-drummer TA himself, author of such classics as the Georgia Satellites' 'Battleship Chains', Dan Baird's 'I Love You Period', and his own 'Fat Lady In the Stands', 'College Girls', 'Man That Rocks', and 'Yesterday Clyde Virginia'. How can you not like a guy who combines a little Chuck Berry, Keith Richards, Nick Lowe, shakes it up in a bag and throws in a little John Prine pathos to boot. Best damn songwriter in America. There. I've said it. Prove me wrong. Then throw in the OAKTeam: Dave Bartholomew and Scotty Miller, who weave blistering guitar lines in and out in a manner that would make the guit-slingin' teams of Woody-Keef, Peter Frampton-Steve Marriott, or Dave Edmunds-Billy Bremner green with six-string envy Longtime TA-mate Jack Cornell on the bass and vocals and ace keyboardist Greg Rice round out the squad. It's like seeing the Who at the Marquee, the Beatles at the Cavern, or the Ramones at CBGB's. These boys bring new meaning to my favorite phrase, 'rock like a mofo'! Miss them at your own risk! -John Holcomb, Amplifier Magazine I won a Terry Anderson and the Olympic Ass-Kicking Team live at Local 506 CD and I got to say IT FUCKING RAWKS, IT FUCKING RAWKS, IT FUCKING RAWKS, IT FUCKING RAWKS, OHMYGAWD, IT FUCKING RAWKS. The only thing it's missing is Terry screaming out GRAVE - YARD - DEAD like he did several times on Saturday night. Did I say IT FUCKING RAWKS? Cause it does man, IT TOTALLY FUCKING RAWKS. And that's pretty high goddamned praise for me cause I ain't really into the rawk that much because as ya'll know I'm more into that Hillbilly music, but damn the OAK Team TOTALLY FUCKING RAWKS my big Hillbilly ass. DISCLAIMER STATEMENT - Until Saturday Night, I had never met Terry, had no idea who the fuck he was, had never slept with him or any of his kin, and neither of us owed the other any money. All statements concerning Terry Anderson and the Olympic Asskicking Team are made for one reason and one reason only, Because they FUCKING RAWK. We now return to your discussion of whatever lameass pussy singer-songwriter you were previously discussing that does not TOTALLY FUCKING RAWK. -Jeff Wall, No Depression 'A rowdy blend of Faces' soul rock, Rockpile's straight-at-ya roots rock, and NRBQ's anything-goes rock, all done up Carolina style. Terry Anderson is the Tarheel state's answer to Dave Edmunds.' - Rick Cornell, Independent, Raleigh, NC.