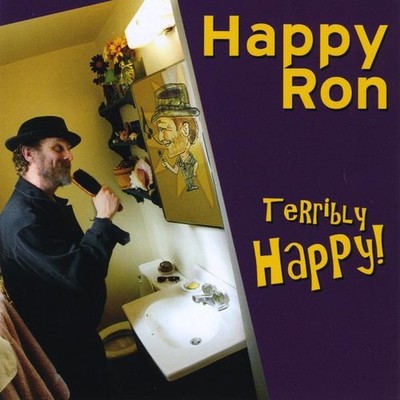 The Happy Man's music has been described by Songsalive.com as a cross between Frank Sinatra and South Park. Others describe it as Punk-Blues Comedy Music. The San Diego Union Tribune has described the Happy Man's music and "act" as "intentional unintentional comedy" Jessie Johnson says it's 'The only real music to come out in the last 10 years, this is some real shit man!' One of his major goals is to appear as himself as a cartoon character on South Park. The Happy Man has lived in San Diego all his life and his hope is to die in San Diego. He never sang a note until he was thirty and didn't get "seriously" into music until he was forty. He was played 500 shows since then and to celebrate his 44rth birthday he will be releasing his first real album, backed by no less then twenty-two of the best musicians and singers in San Diego. Produced by local music guru Sven-Erik Seaholm. The songs are all original songs with a comedic bent with a few exceptions. The goal is always to write and perform good SONGS, not just funny words with little thought to the music behind: TERRIBLY HAPPY - About being happy in a job you hate, after childbirth, and even if your album bombs. Co-written with Mike Sullivan and Risa Berger. PITTER PATTER - About the women who make your heart pitter patter. THE NO TANTRIC WOMAN BLUES - About the 2nd worst blues of dem all. ALL SHE NEEDS IS A SPANKING - That's all she ever really wants. DON'T STOP PLAYING - You don't stop playing because you grow old, you grow old cause you stop... playing. SICK OF HER SHIT - Is dedicated to strippers everywhere, remember you may love her, but someone somewhere is sick of her shit. NO "ANGEL" - The "serious love song" of the album, about remaining loyal to the one who has always been by your side in the face of supposed temptations. BOY TOY - About the attempted sexual exploitation of forty-something male musicians by twenty-something female fans. THE MEAN THERAPIST BLUES - About the worst blues of dem all. PRETTY ON THE INSIDE - Make sure they're pretty on the inside, not just pretty on the outside. THE GOOD NEWS IS - The "serious" rocker song, why just listen to bad news? Co-written with Tommy Dahill. DICKLESS WONDER - About guys who are afraid to make a move, even when it's wanted. BARTENDER BARTENDER - Will you marry me??? The supporting musicians are some of the best in the San Diego Music Scene featuring Tommy Dahill, Rob Garbo, Robin Henkel, Sonny Darren, Reverend Stickman, Bahman Sarram, Isaac Cheong, and members of The Catherine Beeks Ordeal, The Wrong Trousers, The Smart Brothers, and Eight Minutes to Twilight.

Here's what you say about
Happy Ron - Terriby Happy.