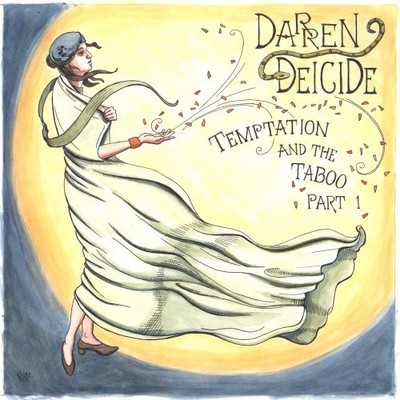 Born on Halloween and raised in the blues and rock n' roll rich environment of Chicago was Darren Deicide. With his self-taught playing style, trademark snarling vocals, a stomping foot, and whiskey-fueled righteousness, Darren Deicide delivers a contemporary style of roots-influenced rock that was described in one review as 'John Lee Hooker meets Johnny Rotten' and in another as 'raw, bluesy punk by a one-man dervish'. Like his own multi-cultural background, his music is an eclectic hybrid of blues, rock n' roll, boogie, spoken word, and even punk, but remains, as described in one review, as 'good, pissed snot-infested rock n roll'. Always a fixture on the independent music scene, Darren Deicide would ultimately ramble his way to New Jersey. There he initiated Ever Reviled Records, a worker-owned and run record label that releases counter-cultural music and was the vocalist/guitarist for the politically-charged, underground radical rock band Hopeless Dregs of Humanity from whose remnants he emerged. Darren Deicide is also an outspoken anarchist. Rockin til the Apocalypse, his debut CD, is released on Ever Reviled Records under his former moniker 'Darren 'Deicide' Kramer'. He maintains a continuous touring schedule and has played with a diverse array of notable artists all over the American east coast, south, and midwest that has spanned from Dead Prez to David Rovics. He's also a regular columnist for New York City-based Urban Folk magazine. Temptation and the Taboo, Part 1, his second full-length release, is available now on Ever Reviled Records. 'A great set of original music.' -The Aquarian Weekly 'Every minute on [Temptation and the Taboo, Part 1] is chock full of raw, bluesy punk by a one-man dervish.' -Reviewer Magazine November 9th, 2006 'Offbeat lyrics, structure, and production head exactly where Deicide is working towards: enjoyably expanding his own artistry and consequently expanding blues music.' -Urban Folk Issue #8 'Darren plays the blues and achieves what he set out to do with style.' -Full Frontal Recordings 'Darren Deicide is the man.' -Alternative Fuel Source August 27, 2006 'I have seen the man single-handedly harangue and hard-fist unwilling audiences into stomping submission. Glass breaks. Beer Spills. Feet Stomp. And people often jerk and jake and pogo and juke until that blues hell broth is near it's boiling point.' -Tangled in the Roots.

Here's what you say about
Darren Deicide - Temptation & the Taboo PT. 1.