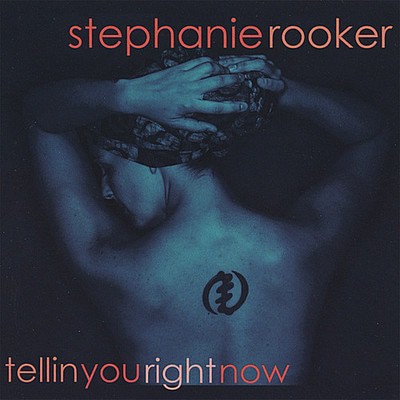 'Listeners should expect the unexpected from Stephanie Rooker...Tellin You Right Now is an excellent effort...a fine album that I wholeheartedly recommend to anyone looking to mix it up musically.' - Katie Frection, Hot Indie News.com 'Very much an individualist...a very, very fine vocalist...this gal really does lend a personal side to everything that she does.' - Charlie Perkinson of NPR's "Jazz Tonight" on WVTF 89.1FM Virginia Tech "Don't try to pigeonhole Stephanie Rooker into a particular style of music. The Radford native will disappoint you...Rooker has a really nice record, Tellin You Right Now, which you should hear...she pulls it off live, and travels with a band of monster players. Her sister, Jen, did backing vocals, and they had the sisterly blend thing happening...By the way, she's real good.' - Tad Dickens, The Roanoke Times "A lush six-piece band backs this soul- and blues-crooning wonder." - C-Ville: Charlottesville News & Arts "Don't be fooled by the release of this album being independent. The quality is nothing short of major and the content, songwriting and musicians are exceptionally great. Having been to several live shows, I recommend the full 360 experience for a complete comprehension of Stephanie Rooker." - Spiritchild of Mental Notes : BIO: Stephanie Rooker is working on making people listen, on calling us to take a moment to recognize what we have, and what we have to give...and this is what her debut recording project, Tellin You Right Now, is all about. Drawing from her broad range of musical influences: from singer-songwriter folk of her native Appalachia to her immersion in traditional folk music of Ghana, from her distinctive grasp of the cultural evolution of American gospel--blues--jazz--soul--hip-hop to her passion for the conscious vibes of '70s soul and reggae music, her sound is fresh and cultivated. Rooker sings with the careful phrasing of a soulful Eva Cassidy, the wailing of a young, blues-steeped Bonnie Raitt, and the self-affirmative slant of Stevie Wonder. Rooker has been performing with her band in New York City and beyond for the past 3 years. In March 2008, she released her first recording project, Tellin You Right Now, to a packed house at the Cutting Room. Since then, Rooker has been scaling the music-scene ladder quickly. Less than a year after her CD release, Rooker made her debut performance NYC's legendary Blue Note in the venue's popular Late Night Groove Series. She has graced the stages of numerous other NYC venues, including Southpaw, Shrine, Nublu, Sugar Bar, Rose Live Music, 55 Bar, Bowery Poetry Club, and has been featured for the past 2 years in the Clinton Concert Series. With her increasing notoriety, Rooker has also been booking high-profile venues outside of New York City, including Blues Alley in Washington, D.C. and the Jefferson Center in Roanoke, VA. Her music, reflecting a life filled with love & growth, pain & healing, and the beauty of hope, is supported by a 6-piece band of young, inspired musicians--all mavericks on the New York scene--from specialized backgrounds in jazz, reggae, gospel, and hip-hop. Rooker's songs are ripe with innovation and rounded by expertise. In Tellin You Right Now, Rooker harnesses this musical diversity, seamlessly blending colors and textures to make each track a unique combination of groove, heart, and light. Rooker attended historically progressive Oberlin College, where her coursework could reflect her broadminded values and support her musical ambitions. There, she designed an independent major in Ethnomusicology with an emphasis on West Africa and the Diaspora. This gave Rooker the opportunity to study for 4 months in Ghana, during which time she conducted field research and recordings and produced a CD of the traditional music of the Ashanti, Dagomba, and Ga people of Ghana. It was also during this time that she began composing her own music and booked her first tour as an acoustic duo with bluegrass guitarist Chris Eldridge (of Chris Thile's 'Punch Brothers'). After graduating from Oberlin, Rooker settled in Brooklyn, NY, where she began pursuing opportunities to hone her musical abilities and immerse herself in the New York music scene. She began studying with jazz pianist Charles Sibirsky, under whose tutelage she recorded her first demo, was introduced to players, and began booking gigs around the city that opened the doors to a promising career. The release of Tellin You Right Now marks the culmination of a journey for Stephanie Rooker. She has produced a collection of her own words and music to speak the truth as she lives it. This music is brimming with hope. It's not a saccharine or unsubstantiated hope, but a wide-awake, insistent kind of hope...the kind that unites us, that reflects on our separations with wisdom and understanding, and reminds us to keep on lovin' and doing good for one another.

Here's what you say about
Stephanie Rooker - Tellin You Right Now.