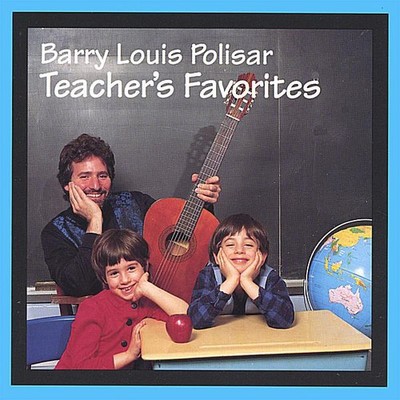 Barry's best known songs about school are grouped together in an updated and polished recording that will be a favorite for the school-aged child--and teacher! Barry sings about school, teachers and about a boy who doesn't want to get out of bed in the morning (he turns out to be the Principal). A deep voiced chorus sings about underwear in a calypso beat and a group of off-key kids consistently respond 'nothing' when repeatedly asked, 'What did you do in school today?' This delightful recording also includes Barry's 1975 classic song, 'I've Got a Teacher and She's So Mean,' a child's heart-felt complaint with a real surprise ending! A funny and meaningful collection. K-Gr 6--Instead of an apple, give your favorite teacher Barry Louis Polisar's hit package, Teacher's Favorites. The production quality is outstanding. The guest musicians use guitars, mandolins, fiddles, dulcimers, slide guitar, clarinet and percussion to give the sound a richness not found in most children's recordings. Polisar's vocals are very playful. He lays down some delightful back-up vocals with his six year old twins and also uses some inventive multi-track vocals of himself on 'I Lost My Pants,' a song about the dilemma of getting ready for school. Other highlights include, 'I Don't Wanna Go to School,' with a surprise ending that will be a hit with all school principals; 'The Alfabet Song,' which includes words not found in most ABC books; and "Don't Eat The Food That is Sitting on Your Plate,' a song sure to be a hit in the school cafeteria. A must buy--even if you already own previous Polisar recordings. --School Library Journal 'My students have been talking about little else besides your TV show and Barry Louis Polisar. We've had to make library cards for the cassette tapes I bought because the students wanted to check them out and share them with their parents. We've had several great discussions and writing activities based on the topics in your songs; you have generated a lot of creative thinking.' --Nancy Kaufhold, Teacher Lancaster, Pennsylvania Kids thoroughly enjoy listening and singing along with Barry Louis Polisar. He talks to kids in a way that is direct but never condescending--reaching them in their funny bone. --Growing Up With Music: A Guide to the Best Recorded Music for Children Barry Louis Polisar is a one-man symphony of comic anarchy. At a time when vast numbers of our kids see school as endless drudgery, Polisar says otherwise. He says, isn't the English language fun? --The Baltimore Sun, Baltimore,MD Barry Louis Polisar is a delightfully subversive antidote to Mr. Rogers -- Tom Lehrer Barry Louis Polisar is a 4-time Parents Choice Award winner whose work has won numerous other awards (including two Emmys for an educational TV show he hosted). He has written and published ten books, many videos and over a dozen collections of his songs. Barry has performed at The White House, The Smithsonian, The Kennedy Center and in schools all over the US and Europe.

Here's what you say about
Barry Louis Polisar - Teachers Favorites.