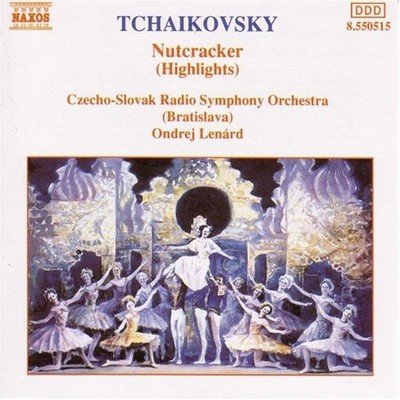 Tchaikovsky's ballet The Nutcracker was first performed in St. Petersburg in 1890, damned with the faintest of praise by the Tsar, who remarked that it was "very nice". The composer himself expressed dissatisfaction with his music for The Nutcracker, a subject proposed by Marius Petipa and the Imperial Theatre Directorate in 1891 and first performed at the Maryinsky in December, 1892, again to a cool reception. The music itself, however, had already proved popular enough in a suite arranged by Tchaikovsky for a concert earlier in the year. The story of the ballet is drawn from E.T.A. Hoffmann's tale, Der Nussknacker und der Mäuserkönig. Set in the eighteenth century, initially in the house of the President of one of the German states of the period, the ballet opens with a children's Christmas party, at which Drosselmeyer, a slightly sinister adult, brings presents, a doll for Clara, the daughter of the house, and a toy soldier for Franz, her brother. When the children are told not to open their presents, Drosselmeyer quietens them by giving the two a pair of nutcrackers, promptly broken by Franz who tries to crack the biggest nut he can find. The Czecho-Slovak Radio Symphony Orchestra (Bratislava), the oldest symphonic ensemble in Slovakia, was founded in 1929. The orchestra's first conductor was František Dyk and over the past sixty years it has worked under the direction of several prominent Czech and Slovak conductors. The orchestra has made many recordings for the Naxas label ranging from the ballet music of Tchaikovsky to more modern works by composers such as Copland, Britten and Prokofiev. For Marco Polo the orchestra has recorded works by Glazunov, Glière, Rubinstein and other late romantic composers and film music of Honegger, Bliss, Ibert and Khachaturian. Ondrej Lenard was born in 1942 and had his early training in Bratislava, where, at the age of 17, he entered the Academy of Music and Drama, to study under Ludovit Rajter. His graduation concert in 1964 was given with the Slovak Philharmonic Orchestra and during his two years of military service he conducted the Army Orchestral Ensemble, later renewing an earlier connection with the Slovak National Opera, where he has continued to direct performances.

Here's what you say about
P.I. Tchaikovsky - Nutcracker.