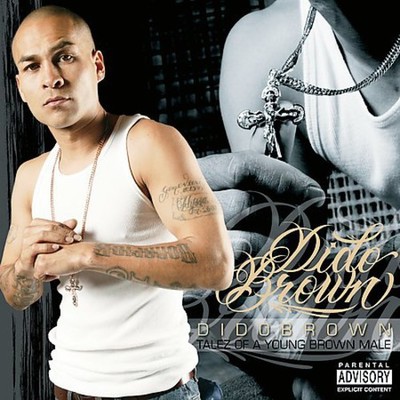 Born into a family of musicians (Dad was a band leader, his Uncle toured with Lionel Richie in the \'80s), Dido Brown grew up immersed in music from a very young age. He imbibed his family\'s music, as well as the great works of 2pac, Ice Cube, E-40, Too Short, NWA and Eazy-E, savoring their lyrical prowess and learning how to flow the way they did. The streets of San Diego proved an easy distraction for Dido, however, and he didn\'t begin throwing himself into music until about five years ago after several stints in juvenile hall and jail. After selling over 70,000 mix tapes independently, Dido is poised to release Talez of a Young Brown Male this fall on SMC/Fontana, an epic odyssey of sorts - taking the listener through the realities many young, urban males face in today\'s world. The album chronicles the life Dido has lived as a young man of mixed Latin and Asian decent and how he interacts with society. In addition to the title song, the record boasts the lead single \'Take \'Em All Out,\' which Dido describes as the lightest fair on the record. \'It\'s very braggadocio,\' he says \'It has a very catchy hook and let's me flex my skills.\' Also on the album, is a prayer in song form entitled \'Thank You\' which features a young choir girl singing the hook, a markedly different approach to what one usually finds in rap music today. Talez of a Young Brown Male features the talents of IRocc, Jayo Felony, BayLoc, Lil Man and the Bonafide Camp. Of his transformation from street tough to music industry hustler, Dido says \'I started substituting dope for CDs and making real, legitimate money,\' he continues \'All we do in the \'hood is rap because we\'re going through shit. In my music, I don\'t do murder shit. I went back to school on my own and wanted to be a counselor for a while, because anytime I needed help, someone was there for me. I want my music to help people in the same way.\' Recently back from a whirlwind tour of Japan, Dido\'s future in the world of hip-hop looks very bright. He\'s excited to be singed to SMC Recordings because, as he says, \'I\'ve been independent my whole life, I don\'t know any other way to be, so it\'s better that my label is, too.\' And indeed, it\'s Dido\'s ability to march to his own drummer that makes Talez of a Young Brown Male one of the greatest recorded stories of the season.

Here's what you say about
Dido Brown - My Story.