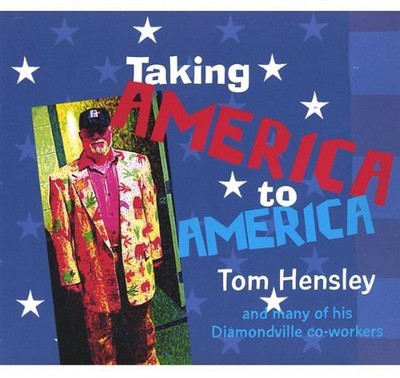 At the conclusion of Neil Diamond's wildly successful 2001-2002 tour, his band scattered to their various homes and projects as usual. But pianist Tom Hensley had decided to set a task for himself. He planned to record a CD of songs based on humorous pieces from his on-tour newsletter, the PBI, which has been published on every Diamond show day since 1986. His original plan was to record it with just piano and vocal and burn enough copies for the band (Touroids, he calls them), but the first piece he did was about the Horndogz (Diamond's stellar horn section), and they volunteered to come in and play on the track. He was so pleased with the results that he began discreetly asking other band members to come in and take part in his project, and by the time it was finished this fall, almost everyone in the band had contributed something to the album, and his co-keyboardist Alan Lindgren and Diamond's recording engineer Bernie Becker had come aboard as co-producers. The modest little gift item turned into a serious album project, and 'Taking America to America' has turned out to be quite a peek into 'the scenes behind the scenes behind the scenes' of a major music tour in the 21st century. Besides the Horndog Victory Chant, there are songs about the Catgut Grrls (Diamond's string quartet on the 2001-2002 tour), the tour's accountants, the room in which the musicians eat their breakfast, the plane on which they fly, the mysterious alter ego of guitarist Hadley Hockensmith, the mythical genius behind their occasional poker games, the mysterious charges on their hotel bills, an imaginary fan letter from a smitten fan, and other peculiar aspects of the touring life. Hensley sings a few novelty songs and then let's the better singers in the band (including Linda Press, Julia Waters, Doug Rhone and King Errisson) step in to do the serious work. In it's 28 years of existence, the Neil Diamond band had never done an album of it's own. It still hasn't, but this is the closest thing to it.

Here's what you say about
Tom Hensley - Taking America to America.