Benjamin Dehart - Takin' Another Crack at It ! 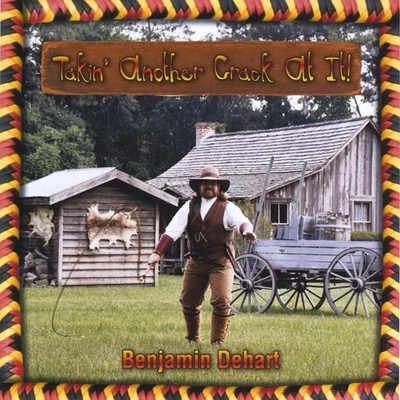 As a kid Benjamin Dehart played autoharp and sang Bluegrass favorites with his two younger brothers at local events and family gatherings. Today, his soaring, lyrical voice is getting to be one of the most sought-after in the Florida Folk Music scene. Born in Ocala but raised in the small farming community of Oxford, Fla., Benjamin grew up around horses and cattle. Although he later moved on to the big city, he never forgot his roots and uses them as inspiration for his music today. 'I developed my love of cowboy songs and the cowboy way of life as a teenager while working for local cattlemen and farmers,' he said. 'Later, I began to participate in historical reenactments, and it was my love of history that focused my musical direction.' It was at a frontier rendezvous encampment not too long ago that folks started taking notice of the burly, red-haired tenor who, by this time, had put aside the autoharp in favor of the acoustic guitar. Right away it seemed his music was in demand. 'People started asking me if I had a CD of my music, and I didn't,' he said. 'But it was touching to have this outpouring from folks who wanted to take my music home with them.' So he made up his mind then and there that he would record a CD and have it ready for the following year's reenacting season. His first CD, 'Warrior Bard,' released in 2002, included a mixture of original tunes, operatic pieces and old Irish and Scottish traditional ballads. His second CD, "Taking Another Crack At It," was released in 2004, and blends cracker cowboy history with the wistfulness of a modern-day mountain man trapped by the urban monster. His third and most recent effort, "Another Side of Me," presents yet another aspect of this singer-songwriter's multi-faceted personality. This album focuses more on Seminole and Native American history, and has a somewhat darker tone than his previous efforts, but will no doubt prove to be very popular among an ever-growing fan base. "This album is very close to my heart. It tells the story of a people who were terribly wronged, of a people hated in war and mistrusted in peace, and of sacrifices made for freedom," Benjamin said. The initial response to the new album has been overwhelming, he said. "I am so thrilled that folks have embraced my work in the manner that they have. I truly love my Florida heritage & history, and I feel honored to be able to express this love through my music." Benjamin has been questioned on many occasions about his vocal training -- of which there has been none. He will always respond to the question by saying, 'Most of the knowledge you need to get by in life can be had just by paying attention.'

Here's what you say about
Benjamin Dehart - Takin' Another Crack at It !.