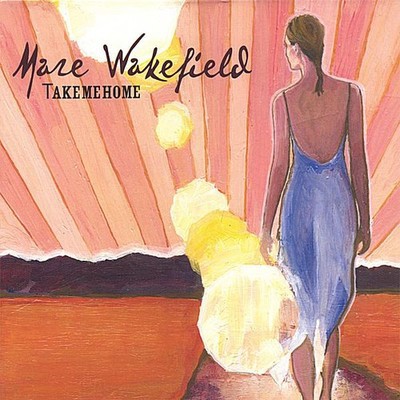 Mare (pronounced Mary) cut her teeth on John Denver and Karen Carpenter -- hey, it's not her fault her parents were square! Teenage years in Texas meant Reba MacEntire and Hank Williams Jr. were thrown in with The Cure and The Smiths, and a long fermentation in Oregon has given her a love of folk music and webbed feet (okay, we're joking about the feet, but Oregonians are chuckling). What could this stir-fry of styles could possibly result in? Silliness, angst and twang, all delivered with a delightful stage presence. Mare gained a devoted following throughout the Northwest thanks to her refreshing songs and the vocal versatility she possesses. The range and power of her voice are what set her apart from the crowd, and have earned her comparisons to such female vocalists as Joni Mitchell and Natalie Merchant while giving her a sound that is distinctly her own. Her voice and lyrics transport the listener, and many who have seen her shows recognize that they have witnessed something special. 'The songs, the voice, the band is just plain good! A voice a bit reminiscent of early k.d. lang, poignant story-telling, diverse scenarios. Wakefield's humor and technique shine from a powerful voice that reaches both ends of the scale.' Nicki Ehrlich -- Victory Music Review Magazine 'Why you aren't a national figure already can only be chalked up to the music business. Your voice, the sublime intelligence of your lyrics and production are first rate.' George Maida, DJ WCVE FM, Richmond, VA 'I enjoyed your album [Factory]. I liked your singing, and the songwriting is unique. I loved the one about the sewing machine... Well done in all' Gail Davies, producer and RCA recording artist, Nashville TN 'More than your typical fly-by-night coffeehouse folk artist [Wakefield is] musically sophisticated, weaving elements of jazz and bluegrass into her compositions. Her lyrics read like stream-of-consciousness short stories. Don't pass up the opportunity to see her perform.' Cheryl Eddy, San Francisco Bay Guardian, San Francisco, CA 'Wakefield's songs are 'old school' in the best possible way: they have an honesty and directness that nowadays are hard to find. With her lyrics she's able to make you think and make you smile ... she even managed to reincarnate the Ghost of John Denver -- what more can you ask for?' Ruben Jonas Schnell, NDR (Norddeutscher Rundfunk), German Public Radio, Hamburg 'Introspective yet very much alive...there's a lovely sense of the upbeat, even in Wakefield's most brutally personal moments.' Andre Hagestedt, Statesman Journal, Salem, OR 'Mare is sultry, cozy and funny; her voice slips somewhere between sweet maple sugar and cognac. Mareâs songs are personal but not agonizing; intimate, but not ponderous. She seems to hold a laugh behind even her more serious lyrics--a laugh and another lighter step.' The Arcata Eye, Arcata CA 'Sweet and clever folk-pop' Willamette Week, Portland, OR 'Good--I liked Wakefield's mix of humor and angst' Bob Doran, North Coast Journal, Eureka, CA 'You are sooooo f*cking talented, beautiful, funny. Why aren't you on tv?' audience member 'Tender songs and a clear voice.' The Oregonian, Portland, OR 'Expressive vocals & poetic writing' The Daily Triplicate, Crescent City, CA 'Back by popular demand.' Tacoma Weekly, Tacoma, WA 'Wakefield's voice can snake through a venue like an invisible conga line, grabbing listeners and pulling them along with a well-placed rhyme or pointed insight.' The Register-Guard, Eugene, OR 'Stirring vocals' San Francisco Bay Times, San Francisco, CA 'Wakefield...was the surprise hit of the show. She...delivered a strong set...and stuck around to sing harmony with just about every performer on the bill. She has a beautiful voice, endearing stage presence and writes...with humor.' WOW Hall Notes, Eugene, OR 'Her original songs blend humor and insight about everyday events...with tenderness and strength. Wakefield's laid-back performance style instantly put the audience at ease, making her shows feel like a circle of friends rather than a concert.' Tanya Igancio, The Source, Bend, OR '[Wakefield's] folk and pop songs are steeped in the everyday with humor and poignant insight.' Auburn Journal, Auburn, CA 'Mare's stronger playing [on Factory] is matched by her maturing voice. The notes come out easy...she's enjoying herself.' Aria Seligmann, Eugene Weekly. Eugene, OR 'Each song draws the listener in to a sort of sacred communion with the band...Wakefield opens her world to the listener, as each songs evolves into a charming story.' Rebecca Shala, The Daily Barometer, Corvallis, OR.

Here's what you say about
Mare Wakefield - Take Me Home.