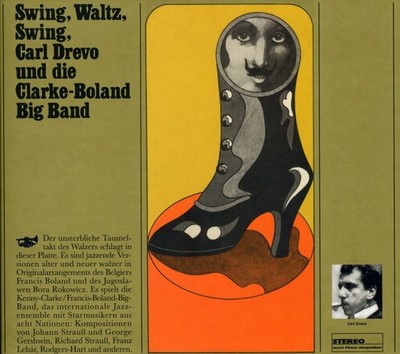 This Big German Band without Germans, have sold their records so far mainly in the United States. But now amongst other things it is being released to the German market with this album. The following are the musicians who were gathered in the Cologne studio: Kenny Clarke, from Paris, one of the founders of the Modern Jazz quartet, Bebop-father and together with Art Blakey and Max Roach one of the most significant jazz-drummers ever. Francis Boland, the sensitive pianist and Arrangeur from Namur, who worked one after the other for Aimé Barelli, Count Basie, Woody Hermann, Kurt Edelhagen and Werner Müller, who also became well-known over the Belgian border. From Stockholm came the trombonist Ake Persson and the bariton-saxophonist Sahib Shihab, who this time produced together with Sadi from Belgium the incredible introduction for the "springvoices Waltz"on the flute. Trumpeter Benny Bailey left Munich and met here with Jimmy Deuchar, Great Britain, Dusko Gojkovic, Jugoslavia, Shake Keane, Jamaica, Nat Peck, USA, Derek Humble, Great Britain and Sal Nistico, Italy. Ahead of them all is the Vienesse tenor saxophonist Carl Drevo, who demonstrates here profile to the sounds of his home country. What they produce is powerful swinging music with a fresh sound, which covers the former melodies of that time with a beaming gleam of today and gives lavish Big Band jewelry to the compositions.