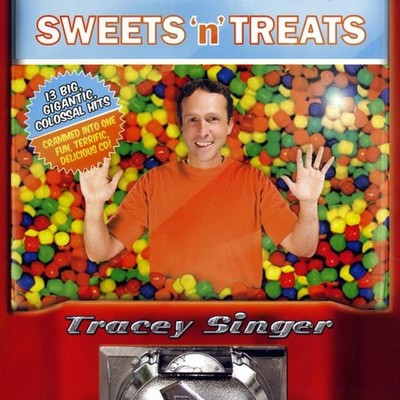 Sweets 'n' Treats features 13 Tracey Singer originals, largely inspired by grand family adventures as work-at-home dad to four children under age nine. Introducing such memorable characters as Foxy Joe, Hard-Hearted Haley, and the remarkable Mall Mom, with song styles ranging from old time rock 'n' roll to close harmony vocals reminiscent of late '40s Andrews Sisters, Sweets 'n' Treats is much more than a simple, happy, pop music romp. Undoubtedly, the upbeat tunes and clever storylines will make your children laugh out loud and dance past bedtime, but the seasoned listener will immediately recognize that Singer is a consummate professional trained in the "Great American Songbook" tradition. His wit and style shine through this album filled with sophisticated harmonies and intelligently crafted compositions, all sung with such refreshingly clear diction that it's easy for kids to completely grasp the lyrics. Tremendous attention to detail has resulted in such special touches as the children's chorus on several tracks. Many recordings of kids' choruses are out of tune and almost painful to hear. The kids on Sweets 'n' Treats are real little pros and "right on" with their intonation, style, and rhythm. Produced by two-time GRAMMY® nominee, children's musician Buck Howdy, Sweets 'n' Treats is a fun and funny musical adventure for kids...and for adults who are not afraid to occasionally act like kids. More About Tracey Singer: The fact that children's singer Tracey Singer (yes, it's his real name) is a stay-at-home dad/musician does not set him apart from the multitudes of performers who juggle songwriting, performing and studio work with full-time parenting. What does make his story different is the fact that he is an MBA who traded a good management position with a Fortune 100 company and the excitement of the climb up the corporate ladder for a life of music, diapers, runny noses and the chaotically fun lifestyle that comes with raising 4 children - all under the age of 9! "Once my first child was born I knew I wanted to be with her," says Singer, "and frankly music has always won over any other pursuits." He recalls registration day for the final year of his undergraduate degree when he excused himself in the middle of a meeting with his Psychology (his major at the time) advisor, with whom he was setting up his schedule, walked over to the music department table and switched his major. He knew that if he didn't switch he would forever regret it. Music has always been a powerful influence. Children are a powerful influence too. After spending years writing choral music and performing jazz standards and oldies at clubs, corporate events and private parties, the influence of his kids brought about a musical career shift. That shift was to the world of children's music. "With 1 child I had time for adult ideas. With 4 little ones not so much - but that turned out to be a good thing!" With his kids crawling, toddling and running around him Singer wrote the music for his debut album, Sweets 'n' Treats, a delightfully fun and funny musical adventure. His songs take us on a tuneful tour of camping trips gone haywire, summer Christmas celebrations, kids wearing baggy pants that barely stay up and the tale of a never satisfied sweet tooth. He also introduces us to a zany cast of characters including Foxy Joe, Hard Hearted Haley and the ever amusing Mall Mom. Singer does this while throwing in several styles of music in not-so-accidental fashion. "Just look at the song list on any child's ipod," he notes, "and you will find song styles that jump all over the place. I created this album to be like a pre-loaded ipod for kids or a fun 'mix tape' for the adults who listen with them." The CD debuts on July 7, 2009 and while getting ready for it's release with little ones jumping on him and hanging from his arms and legs makes his job a challenge, he wouldn't trade the experience for any cool, comfortable and quiet office in the world.

Here's what you say about
Tracey Singer - Sweets 'N' Treats.