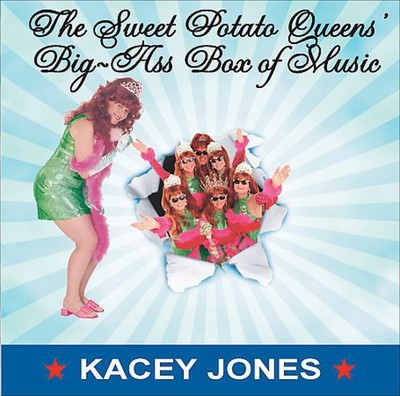 She's been virtually the laughing stock of the music industry for years. She's been laughed at outside the Nashville city limits by the likes of People Magazine, USA Today, Billboard, and the L.A. Times. With KACEY JONES there's a lot to laugh about. 'The Sweet Potato Queens' Big-Ass Box of Music,' (IGO Records) proves that Kacey Jones won't be taken seriously anytime soon. The follow-up to, 'Never Wear Panties to a Party,' this creation is not only bottomless in comedy appeal, but in establishing the vocal talent and comedy genius caught in the grooves. In the hard work-a-day world of carving a national name as one of the brightest new musical humorists to break through in recent years, Kacey Jones is used to breaking the mold. Singer, songwriter, musician, recording artist, producer, and publisher--all distinct descriptions that fit only one unique piece of this puzzle. When completely assembled, the one that emerges is one of a delightful, born and bred in the San Francisco Bay Area, madcap redhead who sees the world at large with laser perception and a funny tilt. The naked truth is that many of the songs on 'The Sweet Potato Queens' Big-Ass Box of Music' were divinely inspired by five best-selling Sweet Potato Queen books written by Kacey's friend and ally, Jill Conner Browne. 'The Sweet Potato Queen's Big-Ass Cookbook & Financial Planner' written by Conner Browne and published by Three Rivers Press/Random House, hit #1 on the NY Times bestseller list for three weeks in March of 2003. Boasting a worldwide membership of 50,000, the Sweet Potato Queens can also boast that Kacey Jones holds the Official Title: 'Royal Minstrel To The Sweet Potato Queens' Court' among the ranks of those who consider the sweet potato a sacred vegetable and have raised it's perception to a national art form. If it all seems off the wall, it's totally sane in the world of Kacey. Hers was, after all, the brilliant mind that conceived one of Nashville's most unique and revered cult groups, the all-girl 'Ethel and The Shameless Hussies,' who broke above the waves in the late 80's to mainstream nominations as 'Comedy Act of the Year,' as well as a major contract with MCA Records. As lead singer and lead comedy writer, Kacey put the Shameless Hussies on America's national radar. Further proving that her talents could produce more than just a few good laughs, Kacey went into the studio with legendary cult artist, Kinky Friedman, only to emerge as the producer of his critically acclaimed project, 'Pearls in the Snow.' The album reached the #1 spot on the Americana radio chart in 1999. She added further weight to her professional portfolio by producing tracks for Willie Nelson, Lyle Lovett, Tom Waits, Dwight Yoakam and Delbert McClinton for the same project. Movies were next to fall under the spell. Kacey contributed three original songs to the soundtrack of the award winning cult film, 'Sordid Lives' starring Beau Bridges, Olivia-Newton-John, Delta Burke, Bonnie Bedalia, and Leslie Jordan. Could television be next? The WB Television Network currently has a sitcom in development titled, 'The Sweet Potato Queens.' 'I hitched my wagon to the Sweet Potato Queens' rising star in 2000,' stated Jones in a recent interview, 'I've got 50,000 fabulous women (and a few Spud Studs) who worship me like I'm their Elvis...it's a Royal ride and I'm enjoying every minute of it.' The simultaneous release of 'The Sweet Potato Queens' Big-Ass Box of Music' and a three-book-box-set by Conner Browne titled, 'The Sweet Potato Queen's Big-Ass Box of Love,' both hit stores on October 7th, 2003...it may be the puff of wind under the dress that lifts Kacey Jones' career to new comedy heights.