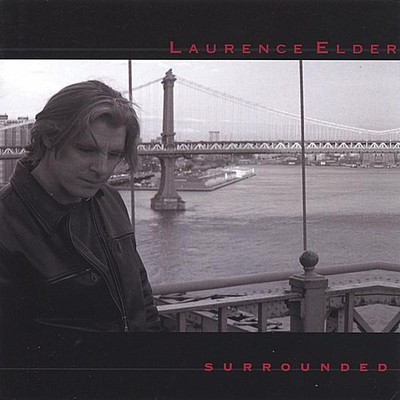 Laurence Elder has swiftly established a strong musical presence in the wake of his sold-out CD release concert at the Van Dyke Cafe, in Miami Beach. His fresh, inspired blend of jazz, rock, blues and pop, along with his 'triple threat' talents as a singer-songwriter-pianist, set his music apart as a vital new original sound. Already a signed artist on ESC Records in Europe and in Japan on the P-Vine label, Laurence has recorded with Grammy winners Paquito D'Rivera and Peter Erskine, who both appear as guests on his critically acclaimed debut album, "Surrounded." The album was recently featured in JAZZIZ Magazine and the accompanying "JAZZIZ on disc" CD sampler, the arts and entertainment section of The Miami Herald, as well as receiving a four-star review in Modern Drummer Magazine. Recent performances include the new Arturo Sandoval Jazz Club, a Valentine's Day show at the Deering Estate attended by over 2000 fans, and a concert opening for Al Dimeola, who has Laurence on his short list of favorite musicians. Laurence's background as a seasoned jazz pianist includes a Master's Degree from the University of Miami's prestigious music school, but on "Surrounded" his evolution as a singer-songwriter is more than apparent as he blurs the lines between genres. "Like Sting, Paul Simon, and Stevie Wonder, Laurence has the ability to go beyond jazz's traditional boundaries," says JAZZIZ Magazine owner and chief editor Michael Fagien, a big fan of the album. While working on a second album, Laurence continues to share his music with the world. His band consists of some of the industry's most sought after musicians, whose collective touring and recording credits include Tito Puente, Paquito D'Rivera, Ruben Blades, Chayenne, Juan Luis Guerra, and Nestor Torres, among many others. CRITICAL ACCLAIM FOR LAURENCE ELDER AND 'SURROUNDED' "From Donald Fagen (Steely Dan) to Bruce Hornsby and Sting... Joni Mitchell to Norah Jones, there was that special something that each had; an education, an appreciation and a constant striving for the nuances that made them artists and not just musicians, connecting with listeners in an indescribable way. Add Laurence Elder to that list." - Michael Fagien, owner/chief editor -JAZZIZ MAGAZINE ____________ 'Sixty seconds into his debut album is enough time to understand why jazz fans revere him.' (click here to read article) -John Sullivan -FLORIDA TRAVEL & LIFE MAGAZINE ____________ '...really extraordinary work..great CDs like this should really sell millions and become trend setters. The music world needs more artists like you!' -Grammy winner Randy Brecker ____________ "A phenomenal album, with excellent production and outstanding material. A record of this quality should be out there. Laurence's playing and compositions are excellent - his understanding and passion for the music shine through...This record is a hit waiting to happen, and should be on the radio and in every record collection." - Grammy winner Al DiMeola ____________ **** FOUR STARS**** - MODERN DRUMMER - September 2005 Issue ____________ 'His voice, deep as tarnished silver, seeps right into the soul.' -ADLIB Magazine, JAPAN ____________ 'Someone who can provide such thrilling reflections on the way of life and cover Elton John's 'Rocket Man' so splendidly for the last track is on his way to the very top.' -NZ Journal, GERMANY ____________ "With the integration of voice, words and possibly the hippest harmony to be featured in a so-called 'commercial' album in a long time (reminding me of what I used to LOVE about pop music), Laurence Elder emerges as a force, not just a piano player.' - Grammy nominated Kenny Werner ____________ 'Surrounded' is an unexpectedly polished pop piano album with vivid lyrics that has drawn comparisons to early Elton John.' - Brett O'Bourke, THE MIAMI HERALD (click here to read article) ____________ 'Laurence Elder is a new voice in music that commands a first and second hearing; after which, you'll be coming back for more. I really like his album, and am pleased to have played on it as well.' - Grammy winner Peter Erskine ____________ 'Yeah, it's been a while since I have been so impressed by a contemporary release, especially by someone I haven't heard before. On this album I found all that has been missing in music these days. Great sound and melodies plus excellent musicianship. Whenever I listen to this CD, I'm always happy, even when listening to the sad ballads. It's the great music that makes me happy. I say this CD is a must for X-mas. You should get it for all your friends so they can experience the joy of listening to Laurence's music. Thank you Laurence. It is through people such as yourself that I get my everyday energy and spirit for life. God bless! - Maciek Pysz, listener review; CDBABY.COM/Laurenceelder.

Here's what you say about
Laurence Elder - Surrounded.