The Crescendo Show - Sure As the Ocean Shore 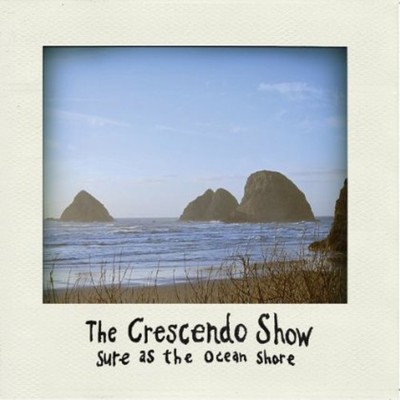 The Crescendo Show is an eclectic quartet of multi-instrumentalists hailing from states across the nation. Nathan Porter is from Pennsylvania and he plays piano, guitar, accordion and is a lead vocalist. Kailyn Kubiak is from New Jersey and she plays guitar and sings lead vocals. Matt Kellam is an Indiana transplant and he plays bass and sings back-up vocals. Ricky Carlson is the lone Oregonian of the band and he plays the guitar, drums, banjo and sings back-up vocals. The group formed in October 2008 with a focus on writing original songs. Some of their biggest musical influences include Paul Simon, The Beatles, The Libertines, Hoots & Hellmouth, Arctic Monkeys, and Flogging Molly. The Crescendo Show's sophomore effort "Sure As The Ocean Shore" is a dynamic, energetic, melody & harmony filled collection of original compositions. This album takes a more stripped down and traditional folk music approach than their debut with skillful and melodic bass lines that anchor rhythmic acoustic guitars, droves of vocals and the occasional use of accordion, banjo and electric guitar. All twelve tracks were recorded over a six month span at Ricky's apartment in Corvallis, Oregon while the band balanced their music with full time jobs and personal life. They recorded with equipment they had purchased with funds saved up from performances throughout 2010 and 2011. The title of the album is taken from lyrics in a song called "Sink Slowly Still", a fan favorite at live performances. Gracing the cover is a photograph shot in Oceanside, Oregon. On April 7th 2012 "Sure As The Ocean Shore" was performed live and officially released to a very warm and full capacity audience at the Corvallis Public Library. This album provides over an hours worth of music and includes a few extra special songs such as Hanna Filter - The bands longest song, a five movement medley influenced by the their love of classical music. Volcanoes - The first song Kailyn ever wrote, and the first of their songs to produce an official music video. Whisperin' Tuesday Mornin' Sun - The first song the band ever worked on together and Swig Lee Otis - A song that originated in one of Nathan's dreams and went on to earn critical acclaim in the Eugene Weekly... "If you haven't already listened to "Swig Lee Otis," you're missing one of the sweetest songs to come out of the Willamette Valley in recent memory. The dreamy, earthy lead vocals of Kailyn Kubiak and Nathan Porter drizzle like caramel over rich, round instrumentation, puncuated by tender banjo picking (yes, tender banjo picking). The song stirs something in the soul. Kubiak also strums guitar, and Porter alternates between piano, accordion and guitar. Matt Kellam on bass and Ricky Carlson on guitar, drums and banjo skillfully fill out the band's sound. In a nutshell, these troubadours are hard to forget. And with their growing oeuvre, you won't have to. They already have two albums under their belt - The Crescendo Show and Sure As The Ocean Shore - and come January 2014, the band will be recording a third at Jackpot! Recording Studio in Portland, OR.' Alex Notman, Eugene Weekly.

Here's what you say about
The Crescendo Show - Sure As the Ocean Shore.