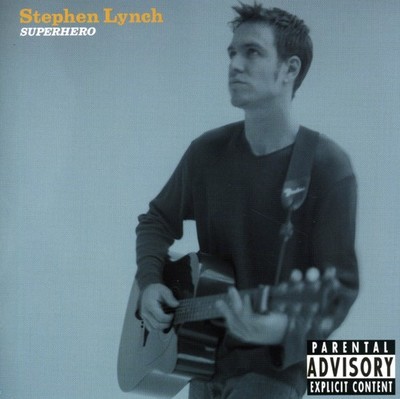 BIOGRAPHY Stephen Lynch has enraged the witless and convulsed the enlightened...all in the sweetest tone of voice, with the most sensitive guitar picking on record since Gordon Lightfoot. He thinks of himself as a serious singer/songwriter and his inspirations, when he began playing guitar and writing songs, were people like Paul Simon and Joni Mitchell. 'I've always admired people who can tell a story with a simple song,' he explains. 'You don't need much more than a guitar or a piano and a voice. That's what I've responded to, even when I was a kid. Even now, I like to think that both Joni and I are expressing some sort of truth -- hers might be just a little deeper, that's all.' In fact, while he was growing up in the suburbs of Saginaw, Michigan, Lynch showed no sign of eventually becoming the neo-folk bête noire. He was a regular sort, into sports for a while, always drawn to music, vaguely aware of the great comedians but not especially fascinated by them. His first dream was to act: In high school he did the usual productions -- Jesus Christ Superstar, Fiddler on the Roof. He played some piano and every now and then tried to write a song -- none of them, at that point, a portent of impending derangement. At Western Michigan University in Kalamazoo Lynch stayed on the acting track as a drama major. But at some point the door toward a life devoted to 'sitting around the house, making my stoned friends laugh as hard as possible' cracked open. Maybe it was that time he saw Spinal Tap and came away a changed, if somewhat damaged, young man. It was there that he started to write songs. 'Lullaby' was the first song I wrote where I felt like, 'Wow, I nailed it!' I don't want to say that people can relate to it -- actually, you kind of hope that nobody can relate to it. But it seemed to me that the style had become subtler. And I saw how to set a course at the beginning, turn ninety degrees, and then once you think you know what's going on, turn it around again. That's pretty much how I've worked ever since then.' Armed with 'Lullaby' and some other twisted material, Lynch hauled his guitar down to Catch A Rising Star for it's weekly 'Big, Bad Music Show.' 'I got a bigger response from those seven people in the audience than I'd gotten with other songs from a crowd of fifty. I went, 'Okay, now I know what I'm doing. I think I've got it from here.' Since that night in 1996 Lynch been writing prolifically, performing exhaustively -- at first around New York but within a few years on nightclub and college tours throughout America. His radio appearances have become the stuff of legend ('He's radio gold,' Greg Hughes, a.k.a. Opie of The Opie and Anthony Show, told The New York Times.) He blew the lid off of Comedy Central Presents in 2000 by racking up higher ratings than almost every other episode of the show. Then came the CDs: A Little Bit Special (2000), recorded in a Brooklyn basement, snatched up with no discernible promotion by thousands of fans, and labeled 'an instant comedy classic' by CD-Now, and Superhero (2002), a pastiche of recordings made live at five different gigs around New York. Which takes us to Live at the El Rey -- the first complete document of a 'typical' Stephen Lynch performance. It's a bare stage -- stool, water -- and Lynch with his guitar. Put another way, Live at the El Rey grabs that door that Lynch pried open in college, rips it off it's hinges, and pushes him through on his way to wider notoriety. It's packed with all the comic essentials -- herpes, abortion, creepy Catholic priests, all of it delivered with a pristine guitar style and a vocal range that manages to evoke both Jeff Buckley and 'Stonehenge.' It's music. It's insane. It's a guy you wouldn't mind your sister dating ... unless, of course, he's.... (check out 'Best Friend's Song'). Simply, it's Stephen Lynch. And he isn't going away.

Here's what you say about
Stephen Lynch - Superhero.