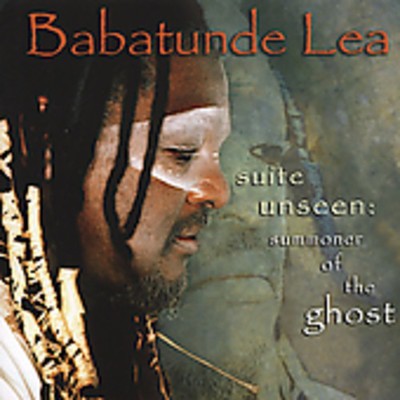 Babatunde Lea Bio Babatunde Lea is one of those 'old souls.' You know the type: wise and serene, blessed with a culturally diverse perspective, bubbling over with ideas and creative energies that strongly suggest they've been this way before; someone deeply in touch with the spiritual essences. Such an impression is borne out in spades by 'Tunde's newest entry in the growing tradition of Motema Music. Suite Unseen: Summoner of the Ghost is a journey through the spirit world powered by contemporary, deeply sculpted grooves and articulations specially crafted by this master percussionist; all delivered by a high-spirited crew of musicians. 'I'm not a religious man, but I do believe in spirit, that it intervenes in our lives in mysterious ways. So I thought with this record I wanted to pay homage to the spirits. This suite is five melodic vignettes that call on the spirits, culminating in [ the 5th and final movement] 'Summoner of the Ghosts. I get more technically adept as I grow and keep practicing, but the one thing that I'm really sure of about my playing is that I can call the ghosts.' To label Babatunde Lea a multiple percussionist is to recognize the holistic, global approach and depth of his skills, as both trap drummer - from whence he primarily operates on this disc - as well as hand drums and miscellaneous percussion from diverse sources. Broad acceptance and critical acclaim were universal for Babatunde Lea's 2003 Motema Music debut Soul Pools. Here's just a sampling: 'Soul Pools is an exceptional, spirited effort by a gifted artist...' (JazzTimes Magazine). 'A master of trap drums and hand percussion, veteran Bay Area jazz musician Babatunde Lea plunges deep into the musical riches of the African diaspora on Soul Pools...' (The San Francisco Bay Guardian). 'Trombonist Ku-umba Frank Lacy and pianist Hilton Ruiz are standouts among percussionist Lea's studio octet, but it's Lea's supple, flowing drum work that is the ongoing focal point' (Down Beat magazine). 'What you get is highly disciplined, tightly arranged, Jazz Messengers-influenced soulful post-bop that's propelled, rather than ruled, by it's leader's formidable technique (LA Weekly). Suite Unseen: Summoner of the Ghost follows in that same tradition, with the intriguing twists of an ancient concept: communing with the spirits. Lea's five-part suite serves as the album's spiritual and creative centerpiece, bridged by the interconnective tissue of nine other evocative pieces contributed in the main by Lea's potent bandmates; notable contributors include tenor saxophonist Richard Howell, with whom Lea has enjoyed a 15-year partnership, and the perennial poll winning trombonist and conch shell specialist Steve Turre. Pianist Glen Pearson, and bassists Geoff Brennan and Ron Belcher round out the cast. From the boisterous, uplifting groove of 'Ancestral Stroll' to the infectious chant and call to the spirits of the closing 'Summoner of the Ghost,' Babatunde Lea has crafted a journey rich with the seasoning that jazz master and one-time Lea collaborator Randy Weston refers to as 'cultural memory.' Babatunde Lea has forged a career steeped in the rhythms of the Motherland of Africa and it's Caribbean & South American diaspora. Lea was raised in New York and Englewood, New Jersey, but in the late 1960s migrated westward to the Bay Area, where he was further immersed in global rhythms, courtesy of such affiliations as fellow percussionist Bill Summers' (The Headhunters; Los Hombres Calientes) visionary ensemble Bata Koto. 'Tunde, as he is known to intimates, has also drawn immeasurable experience working with such singular stylists as Leon Thomas, Pharoah Sanders, Stan Getz, Joe Henderson, McCoy Tyner, Van Morrison, Oscar Brown, Jr., and a host of others. Lea's cultural quest doesn't end at the bandstand. Since 1993 he and spouse Dr. Virginia Lea have operated the Educultural Foundation, a Bay Area youth education operation that through a variety of programs immerses students and schools in global rhythms primarily from Africa and the Caribbean diaspora. 'The Educultural Foundation is something my wife and I put together to sow seeds of change and be agents of change, trying to better ourselves and our communities. We teach critical thinking about social and cultural issues through the arts,' the drummer informs. One of their programs, Yo Ancestors! Neatly dovetails and is a precursor to Suite Unseen: Summoner of the Ghost's quest for the spiritual essences. Asked to detail his overall career philosophy, Babatunde eagerly divulges that 'I draw a lot from African culture and one of the main things I draw is that music is functional; in African life music accompanies everything. The music can put you in a space to make you learn a lot, to open you up. Once you're open and energized then you can start building things to make the world a better place. Music is like oil and water: it does the bidding of who controls it; it has the power to open you up but it doesn't direct where you're gonna go once you're open.' The music of Babatunde Lea will open you up to it's spiritual quest in a way you will find both stimulating to the body and 'educultural' for the mind.

Here's what you say about
Babatunde Lea - Suite Unseen: Summoner of the Ghost.