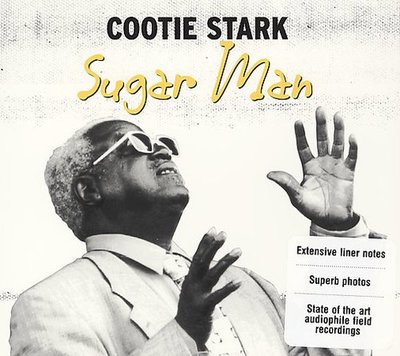 Cootie Stark is one of the last authentic Piedmont blues guitarist/singers alive today. He learned his songs at the feet of the originators of Piedmont Blues - Baby Tate, Pink Anderson, Walter Phelps, Peg Leg Sam and Blind Sammy Doolie. Cootie Stark has a repertoire of 100's of Blues and Gospel songs, making him one of the last direct links to a South long gone. 'I've been playing guitar for 50 years,' reports Stark, 'I started beating on cans before I got a guitar and my mother told me I was singing since I was a baby.' Although music was always in the forefront, the life of a transient bluesman is hard on the body and hard on the pocket - after years on the road, Cootie was left with little money and a dwindling audience for the deep-rooted blues that defined his style. In the 1980's, the blind Stark settled into the Woodland Homes Projects in Greenville, NC. 'By then, the real Piedmont blues was pretty much gone,' he says. 'All them guys were dead and gone and I wasn't making no headway' In the spring of 1997, Music Maker founder Tim Duffy heard Cootie Stark playing electric guitar and singing Fats Domino songs. Duffy questioned Stark about his knowledge of the old songs and was blown away to find himself face-to-face with a Piedmont Blues original. Within months of hooking up with Duffy, Cootie had a new acoustic guitar and a promising career. Stark has been universally praised in his first years as an international blues figure. His abrasive, percussive guitar style melds with a vocal arsenal that ranges from a roughhewn gospel shout to a tight, pretty vibrato. Both European and American concert-goers have been held captive by Stark's raw and powerful performances. On his first recording, SUGAR MAN, listeners receive the true, oral tradition of the blues. Stark's timeless versions of familiar and obscure songs show us that deeprooted blues are still alive and vibrant.

Here's what you say about
Cootie Stark - Sugar Man.