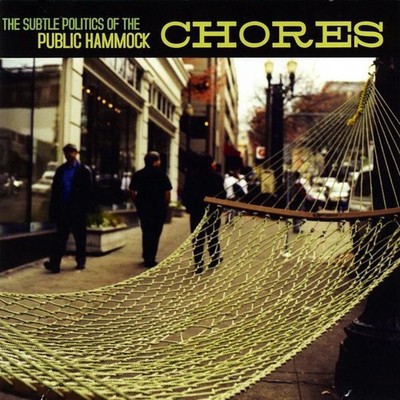 In a musical landscape that tends to favor Polish over passion, whispers rather than yells, and apathy instead of action, Portland-based Chores is lively, loud, and opinionated. Blending heart-on-sleeve honesty, pissed-off political rhetoric, and occasionally heady language, Chores revels in the paradoxes of modern life with unabashed energy and unchecked confidence. These elements are brought fully to life on Chores's first full-length album, the subtle politics of the Public Hammock, released Spring 2009 by Field Hymns Records. Combining their knowledge of the rock-and-roll mythos with an unquenchable desire to innovate, Chores's new album rocks hard and weird. Infusing the arty sprawl of Yo La Tengo with the ramshackle energy of Pavement, Public Hammock careens between genres while retaining the basic elements of rock, pop, and noise. The album hurtles like a pinball through 45 minutes of anger, whimsy, regret, and joy: From the sonic blast of 'Make the World Go Away' to the noisy pop of 'Rose,' the political, pseudo-psychedelia of 'New New Deal,' and the edgy, Television influenced strut of 'My Own Private Esperanto,' each song fizzes with a vitality that can only be described as 'Chores-ish.' When founding members Jada Pierce, Lou Thomas (also of A Weather), and Eric Mellor first met in 2005, all were reeling from big changes, struggling to get respective grips on their everyday lives and loves. This angst was etched into the DNA of their 2007 EP Life is Hard. Music was release and catharsis for each as they continued to hone their style through an intensely collaborative writing process. Since then, they've learned to appreciate the shaky ground on which they stand and tackle issues of social import in songs like 'Super Car' and 'Noinsuranceland.' The addition of drummer Matthew White completed the transition to a bigger, more frenetic sound that brought the band's live shows to new heights. Chores fine-tuned the songs for Public Hammock during two 2008 West Coast tours and numerous Pacific Northwest gigs. Produced by Chores and recorded mostly by Matthew with the assistance of local luminaries Mike Coykendall (M. Ward, Blitzen Trapper) and Gus Elg of Pants Machine (who also mixed the album), the subtle politics of the Public Hammock gleefully straddles contradictions. The record is the inaugural release for Portland's Field Hymns Records. Look for Chores to support their album with tours and shows at a venue near you throughout 2009. •'Chores currently makes the kind of music a pre-Warner Sub Pop might happily have pressed, if not Merge or Matador back in the day.' -Crawdaddy •'While pop acts like the Shins hog all the glory and roll playfully upon waterbeds filled with Cristal, bands like Chores are why Portland pop music is on the map. Life Is Hard, the debut EP from Chores is an absolutely flawless gathering of pop songs that work in every setting-from the basement, to the stage, to that waterbed full of imported champagne-from a band that has perfected their craft.' -Portland Mercury •'Hatred level with Chores? Next to zero. Like valkyries swooping in from Portland, my fog lifts with their strange brew - I hear everyone from Creedence to Talking Heads to King Missle (just a little) and it makes me perk up more than any band I've seen here in awhile. It's fog lifting and really goddamned impressive.' -the Goddamn Blog. Review of live set at the Blue Moon Cafe, Seattle.

Here's what you say about
Chores - Subtle Politics of the Public Hammock.