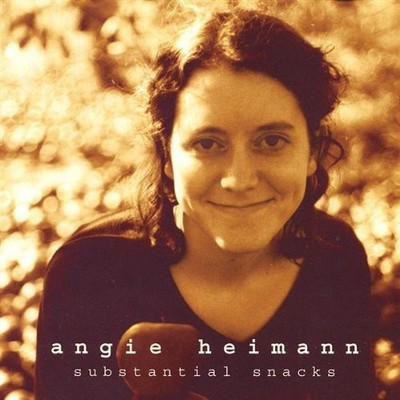 Forget that she has a magnificent voice, one that gets inside of you and weaves into the folds of your memory, striking a chord of something deeply familiar but forgotten. Put it aside for now that being at one of her live shows is like being in a living room alone with Angie- that she and her guitar will tell you stories in such a way that you feel like you must be old chums. What you really need to know about Angie Heimann and her music is that her lyrics are as savory and nutritious as a nine course vegetarian meal- the perfect yet tough to find combination of spice, tanginess, and satisfying wholesomeness. Angie sings about every day topics- her move from Georgia, her teensy bladder, her haircut- but she peppers these recountings of day-to-day events with dashes of wit, depth, fun and beauty so that each song becomes a luscious, gratifying morsel of goodness. Angie's fundamental beliefs- that people are good at heart, that life is short and precious, that true loving is not at all what they say it is on TV or on most radio stations- come through as plainly as potatoes in her songs. But the way she serves them is not, at all, plain. She adds metaphor, humor, and regional spice, and when she's finished each song, you'll find that you've been served a healthful, zesty delicacy that will leave you piqued for the next course. Angie began writing at the age of 12. Since then, she has graduated from Miami University with an interdisciplinary degree that combined creative writing, women's studies and literature studies. She has created her own record label (Cinnamon Bones Music) and on it has released two self-produced albums (Cinnamon Bones, released in May of 2000 and Substantial Snacks, released in April of 2001.)She has received air play on various folk shows throughout the US. She has won and been a finalist at the famous Eddie's Attic open mic competition (Atlanta, GA) more times than you could count on both hands. She has played the northeast Ohio circuit of colleges, festivals, bars, and coffee shops (averaging 22 shows per month in Jan. And Feb. ^#^of 2001.) She has a flourishing fan base in her home region of northeast Ohio, as well as an abounding mailing list and a strong internet presence. This contemporary folkstress has the whole package. Just as her tunes can aptly be compared to a nourishing and scrumptious meal, experiencing Angie's art live- her lush, exquisite vocals, her rhythmic, arpeggiated guitaring and her endearing stage presence can fittingly be compared to eating in an intimate, owner- operated cafe'. Angie's listeners become fans because they know they've discovered something novel and nutritious. In a world overrun by pop radio, which doles out songs much like fast food chains serve up burgers and fries, Angie Heimann's music is a fresh, organic treat.

Here's what you say about
Angie Heimann - Substantial Snacks.