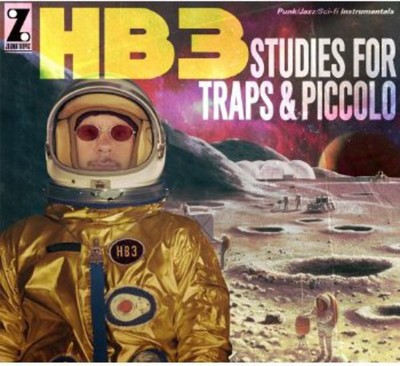 The soundtrack to the craziest sci-fi cartoon you've never seen. Twelve months. Three albums. It's been a busy year for HB3, who, following May 09's 'The Veldt' and October 09's 'HB3 Plays the Piccolo Bass,' now presents 'Studies for Traps & Piccolo,' a new collection of instrumental music performed exclusively on drums and piccolo bass. 'SFTAP is really meant as a companion piece to HB3 Plays the Piccolo Bass,' says HB3. 'Like that album, it highlights the piccolo bass as a solo instrument. However, as the title suggests, we've got drums now, and a more aggressive, effects-driven approach. The sound is stripped down, primal, sophisticated, bombastic; and like The Veldt, there seems to be some sort of story going on here -- halfway through working on it, I began imagining it as the soundtrack to some crazy pulp sci-fi novel, a cartoon owing as much to Salvador Dali as Ray Bradbury. Musical influences include early KISS, BOC, Led Zep; but again in a somewhat surreal key, as though Karlheinz Stockhausen had somehow snuck into the original recording sessions of 'Detroit Rock City.'' The album follows a basic pattern of one song featuring piccolo bass and drums followed by one featuring solo piccolo: Rocket Science: Drums and piccolo. With it's Frehley-esque riff, Rocket Science opens SFTAP with a blast of silver sparks and 70s era opulence. The Machineries of Joy: Solo Performance. The echoing mysteries of deep space explored via a palette of Moog effects. Leroy of the Ancient World: Drums and piccolo. The tale of a ne'er-do-well caveman, Leroy, as he battles dinosaurs on an ancient, perhaps alien world. Fire Fisher: Another solo piccolo piece of dawning alien mystery and 70s crime-drama. Brutal Bed: A Stockhausen-like exploration through shimmering dimensions of electrodynamic resonance and throbbing multi-filters; performed exclusively on piccolo bass. Tyrannosaurus Rex: Drums and piccolo. Those dinosaurs get out of hand again; the battle ensues. The Abyss: Solo performance. A descent into mystery, longing, and terror. The One Who Waits: Drums and piccolo. The final transformation.

Here's what you say about
Hb3 - Studies for Traps & Piccolo.