Joanne Rand - Stories from the Inside Out (Nashville Sessions) 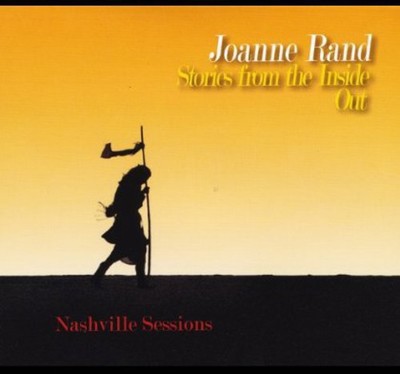 Touring nationally for a quarter of a century, Joanne Rand 'continues to push the art pedal to the floor' with her 13th CD release: Stories from the Inside Out - Nashville Sessions. Rand recorded 14 new songs during her 2012 guitar apprenticeship in the U.S. music capital with songwriting legend Steve Young, (pioneer of "outlaw country" and Americana music, with titles including "Seven Bridges Road," and "Lonesome, On'ry and Mean"). Rand dug deep within to write and record these tunes, delivered with her inimitable voice, elegant guitar, and unflinching commitment to truth. Focus Tracks #1 - Torch of Freedom # 3 - Rattlesnake # 4 - Birdie Fly #11 - A Change Gonna Come Genre: Folk, Americana, Singer-Songwriter, National Release Date/Going for Adds: March 15, 2013 ?With a handpicked team of professional musicians and engineers, Rand produced these songs over the course of a year. Instrumentation includes: voice, acoustic and electric guitars, harmonium, keyboards, violin, cello, viola, flute, bass, synth, kalimba and percussion. The mix was produced and mastered by Stephen Hart (Stevie Ray Vaughn, Neville Brothers, David Bowie, White Stripes). "I am a storyteller who tells stories in the FIRST person," says Rand, "crawling inside the skin of each song and turning it inside out for the listener to get the visceral experience. The more personal the truth, the more universal - such is my belief." Stories from the Inside Out is a shimmering collection of songs speaking to the heart and the world around us: Lead track, "Torch of Freedom," paints a series of vignettes exploring our world at war and peace. "Underneath the Maple," written in a tent during a thunderstorm, celebrates fleeting shelter from the storm and love of family. "Whale" tells the true story of a mother and baby whale who swam up a river and circled beneath a bridge for weeks, while hundreds watched. The chiming anthem, "Nation of Earth," heralds a larger sense of patriotism, beyond borders. "Bryan's Song" pays tribute to a young man's passing, based on a ukulele riff he wrote. The transcendent "Birdie Fly" is a love song to wanderlust, describing the pull between dreams and worldly ties. All songs are original with the exception of three tracks hearkening back to Rand's Southern upbringing: the Appalachian traditional, "Rattlesnake;" Sam Cooke's civil rights era gospel inspired "Change Gonna Come," and The Coming of the Roads' by Billy Edd Wheeler. Hailed as 'Nothing short of brilliant' by Santa Rosa, CA Press Democrat, and voted 'Best Acoustic Band' by North Bay Bohemian reader's poll, Rand has appeared with artists such as Bonnie Raitt, Bob Weir, and John Hartford. In 2010 Rand earned a BFA in Music Composition, and released Snake Oil & Hummingbirds, submitted for Grammy nomination by the president of the San Francisco Recording Academy. Her last four CDs were released in the past four consecutive years and in 2012 she toured the U.S. from border to border. "The muse which inspires Rand only seems to grow stronger with time" (Eugene Weekly). Publicity & Radio Contact: Sue DuMond ^ [email protected] ^ 360-468-2753 ^ Joanne Rand ^ [email protected] ^ 877-803-1576 ^.

Here's what you say about
Joanne Rand - Stories from the Inside Out (Nashville Sessions).