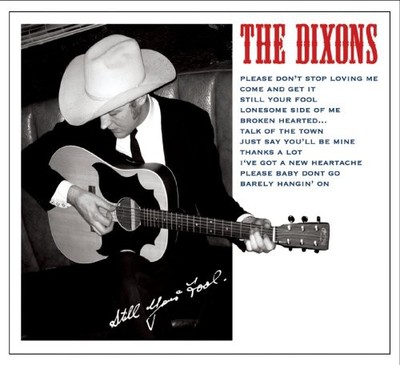 Debut release by the most authentic Bakersfield style country band since the Derailers. The Dixons, based in Brooklyn, New York, have produced a record that is going make fans of old-school country think they died and went to Honky Tonk Heaven. "Still Your Fool" includes 8 original songs written by singer/songwriter Jeffery Mowrer along with 3 choice covers. Jeff has got a voice that can pull off real country songs like few people can. His cover of 'Thanks A Lot' will send chills down the listener's spine and would surely make Ernest Tubb proud. Sure to be at the top of critics best country lists for 2008. 'One of this years best country albums comes from an unknown Brooklyn band? Hell yeah!' -Chris Aaland, Durango Telegraph '...good original songs, there were a few that I had to grab the CD cover and say 'who wrote that'? And it turned out to be an original. I really dig the band!' - Deke Dickerson, Entertainer #1 on the list of Overlooked Albums of 2008: 'We often get the pitch that a country band from New York would make a good story, but despite perceptions, it's not that unique, and often times, it's not that good. The Dixons, however, have released an extremely pleasing record that manages to replicate the Bakersfield/honky tonk sound without sounding trite or dated.' - Brad Vercher, the 9513-Country Music 'Having your CD come out on Cow Island has become the type of endorsement that raises expectations, and the Dixons don't disappoint...I'd sure as hell go listen and dance to these guys live whenever I had a chance, and will enjoy this CD until that happens!' -Marc Bristol, Blue Suede News 'Cow Island Music has been about as reliable as they come record label land when it comes to releasing authentic honky tonk music...Rooted in a classic country sound chock full of pedal steel that drives or cries with the song subject matter, plenty of twangy guitar, and a burly-voiced lead singer in Jeffrey Mowrer whose got an Ernest Tubb flavor to his voice (check out his impressive cover of E.T.'s 'Thanks A Lot'!), Still Your Fool from the Dixons is a winner.' -Dan Ferguson, Freight Train Boogie 'It hits hard with the sort of raw emotional truth that once upon a time country music delivered routinely.' -Jerome Clark, Rambles.net 'Bill Hunt is getting to be one scary SOB. His Boston-based label has become the Real Country leader in very short order, his main act is from Vermont, his up-and-comers are from Baltimore and Brooklyn. Boston? Vermont? Baltimore? Brooklyn????? Jeff Mowrer provides the smooth vocals and eight spot-on originals...like all Cow Island releases, [it] is satisfaction guaranteed.' -John Conquest, 3rd Coast Music Magazine 'Call it a mystery of cartography: somehow, Bakersfield has ended up in Brooklyn. Occasionally music drifts in that has such a time-machine quality that your driven to salute it's purity and hold firm to the belief that it's makers aren't just trying on hats and passing through. That's the case with the Dixons. Jeff Mowrer's voice, good-whiskey smooth with a natural catch, is backed by everything a traditionalist could want.' -Rick Cornell, Country Standard Time Magazine '...though their influences are to be found in the great masters of the past (Buck Owens, Ray Price, George Jones, Harlan Howard...you get the picture?), they are by no means a retro band. They keep this music fresh and contemporary, just a today's country band with roots like the Derailers and Dwight Yoakam were before them. A long lost thing in Nashville it seems. Another killer from Cow Island Music. - Fred Virgil Turgis, Jumping From Six to Six.

Here's what you say about
Dixons - Still Your Fool.