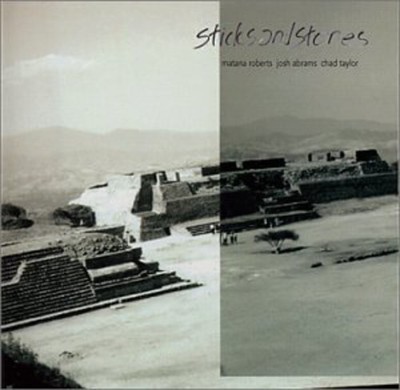 The members of the Chicago-born trio Sticks & Stones first got together on the stage of the Velvet Lounge as part of the Sunday night house band about four years ago. For the past three years, alto saxophonist Matana Roberts (AACM), bassist Joshua Abrams (Town and Country, David Boykin's Expanse), and drummer Chad Taylor (Chicago Underground ensembles) have crafted their own brand of honest collective music in the great Chicago tradition. The group's self-titled debut features three original compositions from each of the group's members plus covers of John McNeil's 'Lose My Number' and Lee 'Scratch' Perry's 'Sons of Slaves.' Matana Roberts has studied with Ran Blake, Cecil McBee, John McNeil, Joe Maneri, Fareed Haque, Steve Coleman, Steve Lacy, Vijay Iyer, and Fred Anderson. In addition to Sticks and Stones she performs with the Boston Microtonal Collective, and Royal Jelly; and is a member of A.A.C.M. Josh Abrams is best known for his work with Town and Country; he has released one solo album and plays also with the David Boykin Expanse/Outet; and has worked with Brokeback, Sam Prekop, Bobby Broom, and Tortoise. Chad Taylor is one half of the Chicago Underground Duo (and therefore key member of the Trio/Quartet/Orchestra); he has played with Malachi Favors, Ernest Dawkins, Joe McPhee, Peter Brotzman, Roscoe Mitchell, Jameel Moondoc, Fred Anderson, William Parker, and Hamid Drake, among many others. 'When Ornette Coleman lit the fuse of the free jazz revolution in the 1950s, he wasn't trying to foment anarchy--he just wanted the option to improvise wherever a melody might take him, without being boxed in by prescribed chord changes. Since then musicians have embraced other sorts of freedom: espousing radical liberation politics (Joe McPhee's album Nation Time), emancipating themselves from meter (Sunny Murray's drumming on Cecil Taylor's Nefertiti, the Beautiful One Has Come), even stepping outside 'jazz' altogether (Evan Parker, originally a Coltrane-inspired saxophonist, has recorded with Tuvan throat singer Sainkho Namtchylak). But for bands like this trio, with saxophonist Matana Roberts, bassist Josh Abrams, and drummer Chad Taylor, there's still nothing more inspirational than a good tune. On Roberts's 'Turning the Mark' (on the group's excellent forthcoming album) her just-sweet-enough alto and Abrams's resonant plucked double bass unwind an elegant, unhurried melody that hovers over Taylor's racing percussion. 'Lose My Number,' by little-known trumpeter John McNeil, launches from an Ornette-like head into a steeplechase in which the horn and drums vault over a walking bass line, tumble into a woolly pileup, then recover their footing to reprise the head in a cantering finale. The trio also has excellent taste when it comes to more familiar material: at the Empty Bottle last March they negotiated the white-water cascade of Thelonious Monk's 'Skippy' and the misty-eyed romanticism of Duke Ellington and Billy Strayhorn's 'Isfahan,' and the record includes a brooding take on Junior Delgado and Lee 'Scratch' Perry's reggae lament 'Sons of Slaves.' All three members used to live in Chicago, but Roberts now lives in Boston and Taylor has relocated to New York City.' -Bill Meyer, Chicago Reader.

Here's what you say about
Sticks & Stones - Sticks and Stones.