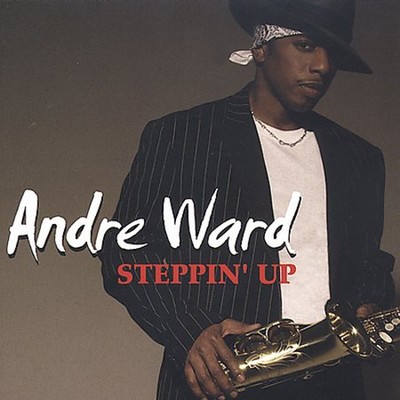 ANDRE WARD With the ability to play the Soprano, Alto, Tenor Saxophone, and EWI ( electronic wind instrument) with skilled ease and passion, Andre Ward has been making noise on the Smooth Jazz scene winning fans over with his dynamic live performances. Having accomplished a top 5 position in Billboard Magazine's Contemporary Jazz Chart with his debut album entitled " Feelin' You," Andre is now ready to take the next step in his progression with his sophomore release appropriately titled "Steppin' Up". Born and raised in Chicago, Illinois, Andre started playing music at the age of five. The snare drum would be his first instrument that would introduce him to his love of music, but it would be the saxophone that would ultimately allow him to receive a music performing scholarship to the renowned Berklee College of Music in Boston. Andre continued gaining recognition around the world, whether it was at the Montreaux Jazz Festival in Switzerland or at the Performing Arts Tour in Africa. With a resume of experience working with some of the biggest names in the business, it is no wonder that Andre can command a stage and personally connect with each listener. As for what inspires Andre creatively, it would have to be his love of different kinds of music. "I think it helps me to be a well-rounded musician. Gospel, Hip-Hop, Contemporary and Traditional Jazz influence me. At first I only listened to Grover Washington, Jr. Then I was introduced to a recording of Cannonball Adderley and was blown away. I didn't know that a saxophonist could sound like this. I fell in love with Traditional Jazz; Charlie Parker and John Coltrane. That is when I began to understand what Grover Washington was doing, he was combining both elements." Andre explains that recording this album has been a pleasure after learning so much while making his first album. Now adding producer to his credits, Andre also teamed up with seasoned producer Yasha who has worked with such artists as Najee and Alex Bugnon. Andre also brings along newcomers, vocalists seventeen year old Chantal Rose on "All I Ever Ask," and Maurice Jacobs doing a rendition of Simply Red's "Holding Back The Years" produced by Michael Powell. Powell is known for his spectacular work with Anita Baker. Andre does a superb job with R. Kelly's "Step In The Name Of Love" and "Heaven In My Life" is an original track that he wrote and produced for his daughter Andre'a. Whether he's writing, creating, or performing his music, Andre loves sharing himself with his listeners. With the release of "Steppin' Up", it is no wonder that Andre is raising the bar and taking it to the next level musically and creatively. Fans old and new will enjoy every bit of it.

Here's what you say about
André Ward - Steppin Up.