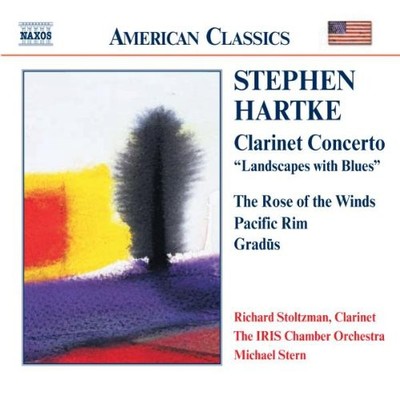 The most recent and longest of the works heard here quite possibly makes the longest musical journey as well. The Clarinet Concerto (2001), subtitled Landscape with Blues, was commissioned by the IRIS Chamber Orchestra for Richard Stoltzman. In offering the commission, the orchestra's Executive Director, Albert Pertalion, asked for a work that might reflect in some way on the heritage of Mississippi Delta Blues. As the composer notes fondly, "he even took me on a whirlwind tour of blues country to get a feel for the birthplace of one of America's greatest musical traditions. From that trip, I took away an indelible sense of the countryside, the heat and humidity, the purple martens chasing mosquitoes at twilight". But in it's realization, the piece goes much farther afield than that. It starts in the West African nations of Senegal and The Gambia, or "Senegambia" as they are sometimes known, with their great musical story-telling tradition known as griot singing, audibly one of the roots of American blues. These audible links are heard in their repetitive accompaniment patterns and rhythmically free, declamatory vocal melodies that tend to begin high then work themselves down to a lower register. Here, Hartke casts the clarinet solo as the griot, with the woodwinds engaging in a sort of call and response chorus, all built over a repeated five-note bass line. The second movement, entitled Delta Nights recalls Hartke's impressions of the Delta, but just as importantly owes much to the novel, Train Whistle Guitar, by Albert Murray, about his boyhood in a small African-American community near the Delta during the heyday of the great itinerant bluesmen. Hartke writes: "In Delta Nights, the soloist evokes a blues harmonica wailing away in the night, and even the structure of the movement is loosely related to a series of blues choruses. Moreover, some of the soloist's turns of phrase are derived from the opening motive of Cool Drink of Water Blues by Tommy Johnson, one of my favorite bluesmen. But the predominant influence here was Murray's recollection of the excitement which fired his boyhood imagination, hearing the distant sound of blues music drifting across the fields from juke joints that he was too young to visit." The final movement, Philamayork, takes it's title from Albert Murray, a compound word he uses to denote the nearly mythical cities of the North, where blues had gone and become a hard-driving urban music. Here Hartke's own New York roots are most apparent, and the movement unfolds almost like a nightclub dance-set, starting with a blues, then a faster dance number, a slow torchy ballad and some travelling music at the finish.

Here's what you say about
Richard Stoltzman - Clarinet Concerto.