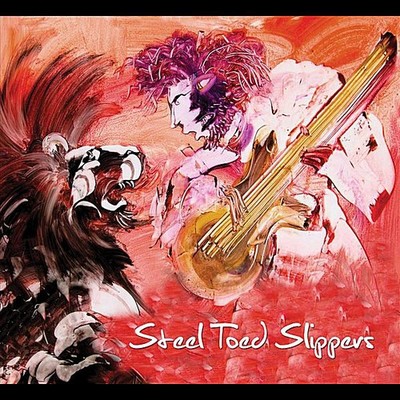 Will Nicoll and Matt Moss formed Steel Toed Slippers in November of 2006 after meeting at their small high school in Humboldt County, California. What started as a simple guitar and drums 'jam' became something very ambitious after Nicoll introduced his own songs to the group. Enlisting Nick Maury on bass, STS went about performing all over Humboldt and Mendocino counties, rapidly creating an intriguing buzz around the community. Delta blues spirit fused with singer/songwriter elements and a strong funk vocabulary made these small town boys sound like they were on to something big. At a show, one may sense some overtones of the Red Hot Chili Peppers, Pink Floyd, and even Tom Waits. Steel Toed Slippers had their first major show as an opening act for Paul Barrere and Fred Tackett of Little Feat, who also served as one of STS' main influences. They would go on to open up for Little Feat three years later at the legendary Canyon Club in southern California. After relocating to the LA county area to pursue their music full-time, Steel Toed Slippers hooked up with Stephen Perkins of Jane's Addiction, where they recorded a demo in his home studio. This new era of STS songs was then brought to producer Roger Cole (Zappa Plays Zappa, The Monkees) who showed them a new level of discipline and self-development. The band toured up and down the state of California at notable venues such as the Harmony Festival, The Canyon Club, the Whiskey A Go-Go, the Roxy, the Mint, the Sacramento County Fair, and several colleges including UC Santa Barbara, Sonoma State University, Cal State Long Beach, Cal State Dominguez Hills, and San Francisco City college. Steel Toed Slippers just finished and released our new CD available worldwide as a FREE digital download! The project features Kenny Gradney of Little Feat playing bass on 6 of the 11 tracks. Kenny also Co Produced the album with 8 time Grammy Award winner, Johnny Lee Schell (Bonnie Raitt, BB King). The project was mixed by legendary producer/engineer, Ed Cherney . One song from the new record was featured in the June 2011 issue of Relix Magazine on the CD Sampler of the month. Look for Steel Toed Slippers again in the July issue of Relix Magazine!