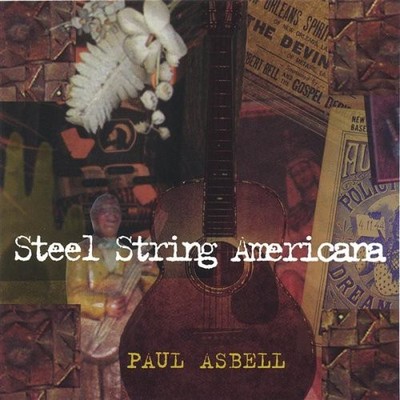 From his early years, playing blues on Chicago's South Side, to his present multi-faceted career based out of northern Vermont, Paul has earned an underground reputation as a true 'musician's musician'. He has played and recorded with Muddy Waters, John Lee Hooker, Howlin' Wolf, Lightnin' Hopkins, Otis Rush, Magic Sam, Earl Hooker, Lightnin' Slim, Paul Butterfield, Sam Lay, Pops Staples, Donny Hathaway, and numerous others while in his hometown of Chicago, Ill. Paul moved to Vermont in the heady 'back-to-the-land' days of 1971, where he still lives. He soon started playing with a head-spinningly diverse array of artists, including Big Mama Thornton, singer-songwriters Paul Siebel, Jim Ringer, Mary McCaslin, and Rosalie Sorrells, jazz greats Jon Hendricks, Bobby McFerrin, Sonny Stitt, and Nick Brignola, and many others. In 1978, seeking an outlet for more personal musical visions, he formed Kilimanjaro, and recorded 2 award-winning albums for Philo Records which led to several appearances at the Kool Jazz Festival at SPAC, the Atlanta Jazz Festival, the Montreal Jazz Festival, the Montreux Jazz Festival in Switzerland, the Roskilde Festival in Copenhagen, and numerous national tours and concert dates. In 1981, he and other members of Kilimajaro joined forces with a legendary saxophonist/blues singer to form Big Joe Burrell and the Unknown Blues Band, which remains a Northeast regional favorite to this day. Recent performance/recording credits include David Bromberg, Paul Butterfield, Betty Carter, Joshua Redman, James Carter, Kermit Ruffins, Michael Ray, the Sun Ra Arkestra, The Wild Magnolias, John Stowell, guitar wunderkind Julian Lage, and former student Trey Anastasio. In 2002, his much-awaited debut acoustic CD, 'Steel String Americana', was released to rave reviews in Guitar Player, Acoustic Guitar, Vintage Guitar, Sing Out, Downbeat, Dirty Linen, and others. The Flynn Theatre called it 'A genre-blurring, virtuosic waltz through the the deep heritage of American folklore, where styles of Robert Johnson, Doc Watson and Dr. John rub elbows with those of Joe Pass and Bill Frisell.' Acoustic Player Magazine.com called it 'A must own CD for any collector of American music.' In March, 2005 a follow-up CD, 'Roots & Branches', was released, and the raves are already starting to roll in. For more info on Paul, check out his website at paulasbell.com.

Here's what you say about
Paul Asbell - Steel String Americana.

1) Such a Night
2) Happy Thumb
3) You Can't Get That Stuff No More
4) Down in the Valley to Pray/Jesus Make Up My Dying Bed
5) My Blue Hellhound
6) Stardust
7) Stack-A-Lee
8) Amos Moses
9) Bury Me Beneath the Willow/Redwing/Knuckle Breakdown
10) I Loves You Porgy
11) You've Been a Good Ole Wagon
12) Will You Still Love Me Tomorrow?