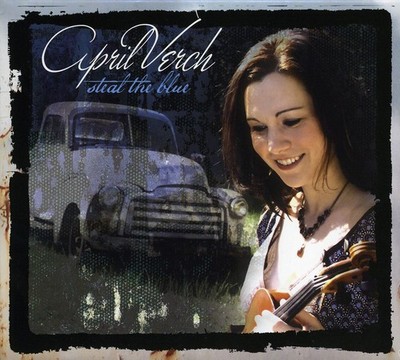 \'April Verch, already known as a world class fiddler, shines as well with outstanding vocals on Steal the Blue. This collection is beautifully produced, performed and arranged. April\'s fiddling is fancy and a lesson in substance and expression.\' -Sam Bush "April Verch sings with such stark, direct intensity that it's almost surprising that her fiddle playing has touches of flash as well as fire." -Nashville City Paper "Playful and flirtatious, whimsical and wry . . . a transcendent level of musicianship where hardearned technique can be safely abandoned." -Toronto Star " . . . her music lives comfortably in a wonderfully old-timey setting that contains equal inspiration from her natural Canadian music traditions, as well as her love for the mountain music of the southern United States." -Mark O'Connor *************************** When you see April Verch perform, the first thing that strikes you is the pure energy that infuses her fiddle playing and stepdancing. When you listen to her though, what draws you in are more subtle things-her pure voice, the finely detailed elegance of her fiddle phrasing and the depth of a repertoire that ranges through material from bluegrass to Brazilian to Celtic, from a jaunty Canadian folksong to a poignant contemporary ballad. April is world-class fiddler, a champion Ottawa Valley stepdancer, an acclaimed composer, and a vocalist whose voice has been hailed as "absolutely captivating" by the Toronto Star. In addition to April's talents, the April Verch Band features world-class musicians Marc Bru on percussion, Lincoln Meyers on guitar, and Cody Walters on upright-electric bass. The April Verch Band tours tirelessly across Canada, the United States, the U.K. and Europe. They have established a reputation as consummate performers, winning over audiences not only with sheer virtuosity on their respective instruments, but also with charm, humor and boundless energy on stage. It was April's time spent studying music at Berklee College of Music in Boston (under Matt Glaser and Darol Anger) that first lead her to blend together different forms of traditional music to form her own distinct sound. She then launched her professional career by winning the Canadian Grand Masters Fiddle Champion and the Canadian Open Fiddle Champion titles (the first and only woman to win both). In addition to her vigorous touring schedule, she is in great demand for her teaching skills at workshops, master classes and music camps. She has released seven recordings to date, her 2001 Rounder Records release earned a JUNO nomination (the Canadian equivalent to a Grammy) for "Best Roots/Traditional Album". Her most recent release, \'Steal the Blue\' (2008) features her touring band and includes the presence of familiar names like Tim Stafford, Larry Cordle, Ron Block, and Melonie Cannon among the songwriters, harmony vocalists and instrumentalists. April is an utterly unique performer, whose high energy brand of musicianship inevitably brings audiences to their feet, whether at a folk festival in Finland, a concert hall like the Ryman Auditorium, a bluegrass festival in Oklahoma, or a Celtic festival in California.

Here's what you say about
April Verch - Steal the Blue.