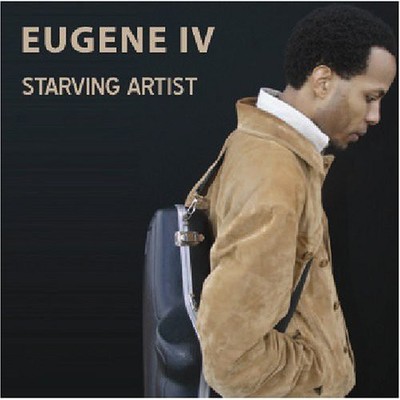 Eugene IV, born and raised in southwest Atlanta, is a multi-talented vocalist, musician, songwriter, actor, and educator. He began playing sax at age 9 and has been writing rhymes since elementary school. Eugene IV has played with bands for the National Black Arts Festival, Auburn Street Festival, Funk Jazz Kafé, and even the Atlanta-Montreaux Music Festival. Eugene IV is a former member of the hip-hop duo not-r-selz, who often performed with Gotee recording artists GRITS and collaborated with Shawn J. Period (producer of songs for Mos Def, Beastie Boys, & the Lyricist Lounge compilation). The group had songs in heavy rotation on Spiritual Vibe {Atlanta's Hot 97 (now Hot 107)}; and was featured on numerous albums, including several underground hip-hop compilations. Eugene IV began acting at Tennessee State University, where he earned a B.S. degree in Biology. About a year after graduation, he canceled plans for grad school to pursue his passion for the arts full-time. Since then, he has performed in countless professional theatre productions (A Raisin in the Sun, Fences, Ain't Misbehavin', etc.), commercials/industrials (Doctor's Hospital, Walt Disney Tribute to Eartha Kitt, etc.) and on television (Mama Flora's Family, Trumpet Awards, etc.). Eugene IV regularly works as a substitute teacher in schools throughout Atlanta. He feels equally accountable to both his students and other potential audiences. "I feel a responsibility to positively affect the lives of the listeners," says Eugene IV about his current project, Starving Artist. Starving Artist is his debut solo album and was chosen as the 1st to be released by the internationally acclaimed Youth Ensemble of Atlanta, of which he is an alumnus. Starving Artist has been described as a soulful hip-hop album combining the musicality of jazz and soul with the rhythms of Hip-Hop and the words of a poet. "My musical inspirations run the gamut from Public Enemy and De La Soul to Earth, Wind & Fire and Wayne Shorter," says Eugene IV. Starving Artist features a special appearance from Arrested Development's Baba Oje. The twelve original tracks also include a powerhouse of musical talent from the vocal stylings of Julie Dexter ("Mama was a Freedom Rider") to Atlanta-based musicians Takana Miyamoto, Khari Cabral Simmons (bassist for India.Arie) and MC Divinity. Starving Artist was engineered by Alex Lowe who has also worked with OutKast, Sunny Emory and many others. Starving Artist is a powerful combination of explosive music and powerfully positive messages of empowerment, responsibility and redemption. "I know, and have known since well before adulthood, that I've been called to make music that cries for social change. As the child of parents who were directly involved in the Civil Rights Movement, I feel it's in my blood to, at the very least, speak out against injustice."

Here's what you say about
Eugene IV - Starving Artist.