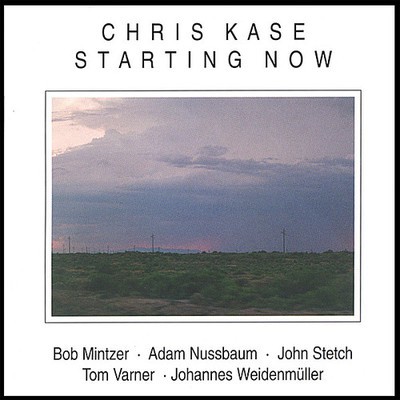 Chris Kase (b. 1964, New Brunswick, NJ) is a jazz trumpeter, flugelhornist, composer and educator who has resided in Madrid, Spain since 1997. He has performed and/or recorded with many well known jazz artists such as: The Mingus Big Band, Adam Nussbaum, Kenny Wheeler, Bob Mintzer, The Bird of Paradise Orchestra, Steve Coleman, Chick Corea, Steve Wilson, Don Braden, Grant Stewart, Bruce Barth, David Berkman, Al Foster and Perico Sambeat, among others. * * * * 'Kase has surrounded himself with some of the best players on the contemporary scene, including saxophonist Bob Mintzer and drummer Adam Nussbaum. There's great potential and present mastery here, and the jazz world at large ought to be paying more attention in the not too distant future.' -Michael G. Nastos, ANN ARBOR NEWS 'Chris Kase sounds relaxed at all tempos, takes a variety of thoughtful but forceful solos, and by the end of this ultimately rewarding disc will have won most listeners over.' -Scott Yanow, JAZZIZ 'There is a lightness to this music that disguises some of it's complexity and sophistication...close listening to the compositions and solos is always more rewarding than the music's surface suggests.' -Krin Gabbard, CADENCE "Cheers for Chris Kase and new harmonies that explore yet swing." -Patricia Myers, JAZZ TIMES 'Aside from the joy of discovering Kase as an instrumentalist and composer whose tunes swing hard and eschew the clichés that predominate so much of today's 'retro-bop,' saxophonist Mintzer, normally associated with more commercial offerings, turns in a fully satisfying straight-ahead performance.' -THE SARATOGIAN "Kase cites Kenny Wheeler as an important influence on his trumpet/flugelhorn style, and both do have a way of sneaking up on you with their understated intensity. Kase's writing favors harmonies that favor silence as the seventh member of the group. Impressive debut." -FACE Magazine.

Here's what you say about
Chris Kase - Starting Now.