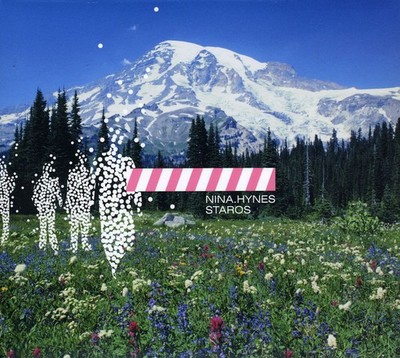 NINA's album STAROS was recorded in Studio Black Box in France and Produced by Nina and ex-Frames member David Odlum with many of her favorite musicians including The Frames helping out. The album is packaged in a special edition, 6 panel Digipak, with a huge foldout insertion, all designed by legendary Irish artist Pete Reddy. While downloads are available through many digital distribution outlets, this special collectors item CD and packaging is only available in North America through CD Baby and Reverb Records. STAROS is full of songs she's been writing over the past two years. Fans of her debut album 'Creation' definitely won't be disappointed. The textures and amazing attention to detail of the production on this album makes it truly special. The album is filled with amazing sounds, huge emotion, love songs, loss songs, lush songs, pop songs and some intriguing edgier moments. The first EP/Single released from the album was entitled MONO PRIX, which is also available through CDBaby. MONO PRIX was re-mixed by the legendary Steve Osborne (Perfecto), whose work includes New Order, Doves, U2, Placebo, and PJ Harvey among others. Two other tracks on the CD are amazing and surreal remixes by Jimmy Behan and David Donohoe. The brilliant accompanying video was produced by forward thinking, animation company D.A.D.D.Y. Nina Hynes continues to spend most of her time touring Europe. Her growing underground cult following just seems to get bigger and bigger. Rumors of a long-awaited return to North American to tour are frequent, but until we see it for ourselves we just won't believe it. Nina Hynes BACKGROUND Dubliner Nina Hynes swapped her studies in Trinity College for a more reclusive existence in a weather-torn corner of Donegal in Northern Ireland. It was there where she learned to play guitar and developed her voice. She then moved to France where she tested out her new-found talents by busking on the streets of Paris. Upon moving back to Dublin and playing on the popular singer/songwriter circuit, Nina decided to get a band together. After gaining a sizeable fan base and crafting some of the songs that would eventually end up on her debut release, she was picked up by Reverb Records, who immediately put NINA and her band into the studio to help finish recording her debut-in-progress 'CREATION'. Once released, CREATION garnered amazing reviews from all corners. Nina ventured out on several U.S. tours to support the album. The tours successfully spanned the length/breadth of the USA's alternative scene with NINA's solo electro-alternative sound in tow. Amazon.com voted it No. 44 in their TOP 100 RELEASES OF THE YEAR. HITS Magazine called it 'The last amazing find of 2000.' Ireland's Hot Press tipped NINA as 'One of the country's most exciting new artists.' The Discovery Channel and Channel 4 featured Nina as an artist for broadcasts of The Lonely Planet stopover in Ireland. Back in her native Dublin, NINA regularly gets asked to support acts as far ranging as Stereolab, Cat Power, David Gray, Terry Callier, Damien Rice, Roxy Music and The Frames. She spends a considerable amount of time collaborating with other artists. Two of her songs were included on an album by German Cellist Wolfram Hushcke released on BMG Classics (the album also features Marianne Faithful and Mimi Goese). She also collaborated on an album with French avant-garde producer Hector Zazou, performing alongside Laurie Anderson and writing a song performed by Jane Birkin (Je T'aime). NINA also toured Europe singing and playing with the legendary composer and former 4AD artist Harold Budd. She was also fortunate enough to be invited on stage to sing with the late Jeff Buckley during his very last visit to Belfast. Additionally you can find several of NINA's songs on various compilations and movie soundtracks. Nina Hynes REVIEWS THE SUNDAY TIMES 'Staros' is an inventive, catchy and resonant collection from the spirited pop verve of her new single Mono Prix to atmospheric electronica and otherworldly ballads.' THE EVENT GUIDE 'Mixing pure pop, electronica and downbeat introspection into a single diverse, multi-layered yet coherent whole. 'Staros' bursts with ideas.' AMAZON.COM 'Like a vivid dream you're not sure was a nightmare or a lovely fantasy, it's an unshakable beautiful release.' SEATTLE WEEKLY 'Brooding off-kilter pop. Her haunting feedback drenched productions could add atmosphere to a DMV waiting room.' HITS MAGAZINE 'Creation; The last amazing find of the year. A hauntingly powerful voice.' Rockpile 'Hypnotic, Sexy, Eerie, Lush, Haunting.'

Here's what you say about
Nina Hynes - Staros.