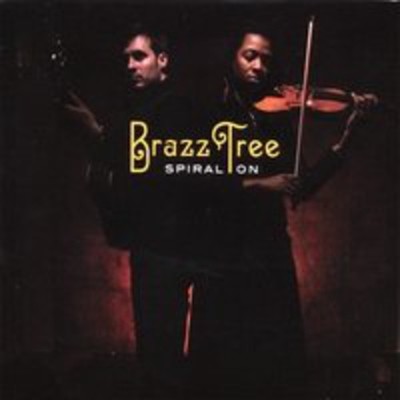 From two seemingly opposite ends of the world (race, gender, education) come 2 American musicians with one global musical vision. What starts out a simple ideal - to combine all of the music that one loves without adhering to stylistic guidelines or parameters - becomes increasingly difficult in a world where "music" is not Music unless easily categorized, classified and/or compartmentalized. While Tower Records and stores like it may sooner or later become things of the past, we generally still try to put artists and their music in a neat little box in our minds. We store that box in Aisle 5 under a sign that reads "JAZZ" or "CLASSICAL" or "ROCK" or "FOLK" or perhaps in that other room. You know the one that is separated from the rest of the store by glass doors and a sign that reads "WORLD". Brazz Tree is a band that combines all of the aforementioned elements in a sometimes cacophonous, sometimes very straightforward, always elegant, but also sometimes swooping around and hitting you in the back of the head sort of way. Says Brad Hammonds (co-founder and guitarist), "We make the music that we want to hear on the radio. And we call it New World Acoustic Rock (or Music NWAR)." New World Acoustic Rock began in the fall of 2003, a few years after a prodigal Mazz Swift (violin and vox) returned from a tough physical, mental and musical journey away from her native New York and safe Juilliard future. She came back with renewed self-confidence and a restored desire to make music. And make it in a big but very pure and natural way. "No Compromises" she says. While Mazz was off battling her demons and re-establishing her beliefs about music, Life, love and relationships in general, Brad Hammonds (acoustic guitars) was forging a journey of his own. Always returning to music making, Brad followed an education in psychology turning his interest to the human mind and it's inner-workings. This interest ultimately brought him to New York City, where he worked in a lab at Columbia Presbyterian Hospital, researching psychophysiology. When they met, they immediately began writing music together. Brad would lay down a basic riff-based idea and Mazz would put lyrics and melodies, or folk/fiddle tunes to it. The first documented effort of the two working together to arrange and shape their music in this way comes in the form of their debut CD '...Quest...' which was released independently in October 2004. With one CD under their belt, the duo - while casually writing new material - began to focus on travel and performance. In February 2006, after a year and some months of performing and writing, the two took their new songs to producers Alan Camlet and Pete Thompson and began working on what would eventually become their second CD - 'Spiral On'. What we hear in 'Spiral On' is the next step in the evolution of Music NWAR. It's the fusion of the Folk, Classical and Jazz elements that were first heard in '...Quest...' with the Pop and Rock elements that Camlet and Thompson bring to the mix. The result is an eclectic and electric sound that mingles very comfortably with the organic and soulful sound that the band has already established. Mazz says, "Our follow up record is very much a manifestation of our desire to continue pushing the envelope as well as to collaborate with other artists." There are guest back up vocalists, a string orchestra, and even a guest producer - the very hip, very talented and very in demand Michael Leonhart (Steely Dan, Lenny Kravitz) lends his musical genius to the song Tick Tock. 'Spiral On' is to be released on July 10th at Joe's Pub in New York City and the Brazz Tree that will take the stage will be quite different from the introverted Brazz Tree of 2003. With it's strong core duo essence intact, there will be a powerful electric band behind them to help represent fully what was recorded on 'Spiral On'.

Here's what you say about
Brazz Tree - Sprial on.