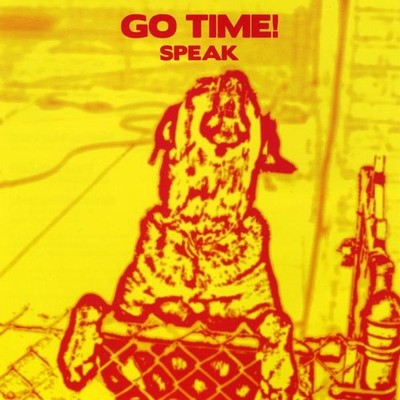 Taking power pop to less-traveled latitudes, Chicago-based GO TIME! Is thrilled to announce the release of their debut CD, Speak. While the band is new, it's four members are no strangers to the Chicago music scene. GO TIME! Is comprised of former Prairie Town members Scott Niekelski (composer/roaring guitars/vocals), Marko Marketti (blasting bass) and Steve Grzenia (pounding percussion). After a year-long search for a guitarist to complement Scott's thunderous style, Paul Schmidt climbed aboard the GO TIME! Winnebago, bringing along a unique, polished style of his own to the mix. Schmidt's professional music career dates back to the late 90s, launching with Central Illinois band, The Cromulents, in which he was both a guitarist and drummer. Paul switched to full-time guitar duties in 2000 when he formed One Million Monkeys with a former bandmate. He worked on several other projects through 2004 when he decided to take a break from music. In 2008, his longings for a creative outlet got the best of him, so Paul began playing Open Mics and worked on home recordings. In August of 2008, he answered an online ad for a band seeking an experienced guitarist...and the rest is history. GO TIME! Officially formed in October of 2007, when Prairie Town amicably disbanded after a two-decade run. Lead singer/composer Paul Coady moved on to new projects, so the three remaining members (Niekelski, Marketti and Grzenia) decided to re-direct the ship and voyage off into uncharted waters. The transition was actually quite smooth, since Niekelski had already been writing about half of the former band's recordings and was a solid vocalist in his own right. The trio was like-minded in their musical tastes, so settling into a harder-edged, power pop groove came quite naturally. The only hurdles that lay ahead were to fill in the gap for the missing guitar and to identify the new GO TIME! ^#^sound. Once Paul came on board, his intricate transitional additions and blues-influenced lead work really helped propel the band to the next level and establish the band's overall sound. Scott had a backlog of material he had written that had yet to see the light of day, so the only other major decision to be made was in choosing the songs for the debut recording. Speak is a 14-song sonic collaboration that travels the spectrum from melodic power pop to paint-peeling, hard rockin' rave outs. In a nutshell, a little something for all musical tastes...well, most musical tastes, anyway.

Here's what you say about
Go Time! - Speak.