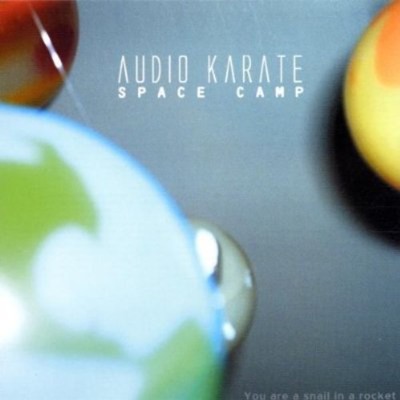 The story of Audio Karate begins like that of most bands: suburban town, no all-age rock clubs, and four kids seeking an outlet for their punk enthusiasm. Rosemead, California is hardly the kind of town that cranks out punk bands, but in the summer of 1995 Rosemead would breed it's first notable band and become home to the new sound of West Coast pop punk. Stealing older siblings' equipment, Gabriel Camacho and Justo Gonzalez began jamming together, influenced by the likes of NOFX, Screeching Weasel, Descendents, and Lagwagon. Later that year they would invite Junior High school classmate Art Barrios to play guitar with them. After the typical spell of personnel and name changes, Audio Karate finalized their image in the spring of 1998 by bringing in Gabriel's cousin Jason to join the band and fill in their sound with a second guitar. Audio Karate's first real gig was at the Santa Fe Springs Swap Meet Talent Show. While coming in second place to a Selena impersonator might bring most punk bands down, the AK boys ventured on and kept writing songs and honing their craft as pop-punk engineers. As their careers began to flourish, Art ran into Ataris lead singer Kris Roe and handed him a demo at one of their shows. Known for bringing bands Antifreeze and Useless I.D. to the Kung Fu roster, Kris has received enough demos at shows to start a library with. However, Kris is also known for being a stickler for good songwriting, and he took notice of the AK demo and sent it to Kung Fu Records owner and Vandals bassist Joe Escalante. A month later Art had a message on his answering machine from Joe saying he got the demo from Kris and wanted to meet with them right away. They met with Joe and Vandals guitarist Warren Fitzgerald, who would produce two more songs for their demo. Without any distribution, they were able to sell 2000 copies of a compilation of demos in a year. Over 2001 and into 2002 they played and toured extensively, opening for Social Distortion, Save Ferris, The Aquabats, The Vandals, The Ataris, RKL, Pulley, plus the 2002 and 2003 Warped Tours. Kung Fu Records signed Audio Karate in the fall of 2001 and will now put the full force of their extensive worldwide distribution behind 'Space Camp,' the band's exceptional full-length debut. Produced by Trever Keith of FACE to FACE, Space Camp will make punkers and critics alike rethink their definition of the 'West Coast sound.' Blending the hyperactive riffs of 'Hoss'-era Lagwagon with the vocal and lyrical styles of The Get Up Kids and the emotional toil of The Ataris, Audio Karate is set to become the new name in pop-punk that will make the girls swoon and the guys pumped at punk shows all over the world.

Here's what you say about
Audio Karate - Space Camp.