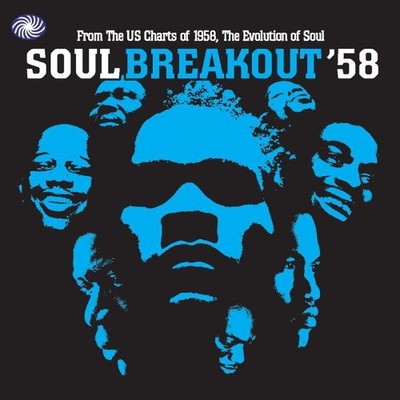 1958 was a transitional year when soul was evolving out of R&B, rock & roll, doo-wop and gospel music, adding a depth of feeling rarely encountered in pop music at that time. Many say Sam Cooke was the inventor of soul music, blending his background in the Soul Stirrers group and his songwriting abilities to create hits like You Send Me and Love You Most of All. Other pioneers such as Bobby Blue Bland and James Brown displayed their vocal power on the classics Little Boy Blue and Try Me. They both went on to have many more successes and long and glittering careers. Jackie Wilson also sang with local gospel groups before a spell singing lead with Billy Ward's Dominoes. On going solo, he hooked up with a young songwriter named Berry Gordy who provided Jackie with the smashes Lonely Teardrops and to Be Loved. The song royalties helped Gordy to go on and found the Motown label the following year. Another refugee from the Dominoes, Clyde McPhatter rose to fame scoring hits as lead with the Drifters. His greatest solo success a Lover's Question is presented here. The Impressions vocal group included future soul giants Jerry Butler and Curtis Mayfield in their line-up and Jerry's distinctive baritone lead is featured on their first two hits for Your Precious Love and Come Back My Love. Little Willie John had been going through a quiet patch, with no hits since 1956, until he scored with the intense ballad Talk to Me, Talk to Me which gave him his highest pop chart placing. Gene Allison was from Nashville and recorded in the style, with pleading vocal delivery and organ and brass backing, that would become known as southern soul. Two examples are his You Can Make It If You Try and Everything Will Be Alright. Brook Benton had already found success as a songwriter, he penned the McPhatter track and the latter Allison title, before charting himself with a song he didn't write a Million Miles from Nowhere. The Pastels yearning Been So Long was led by Difosco Ervin, who would later find solo fame as Big Dee Irwin. Ed Townsend was better known as a songwriter and producer, his only hit as a singer was with the future soul standard for Your Love. R&B stalwarts Chuck Willis, Tommy Edwards and Nappy Brown proved they could adapt to the style on the favourites What Am I Living For, It's All in the Game and It Don t Hurt No More. On the lighter side but still soulful are Dee Clark's Nobody But You, Wade Flemons Here I Stand and Billy Myles the Joker (That's What They Call Me).

Here's what you say about
Various Artists - Soul Breakout 1958.