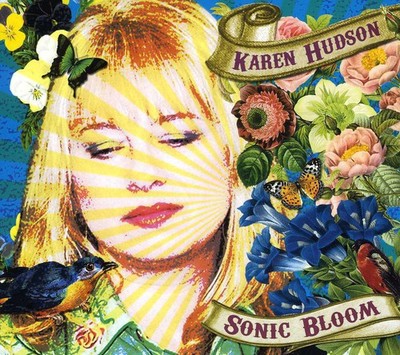 'An original and distinctive presence in the New York Americana scene, Karen Hudson wins audiences over with her edgy wit, elegant stage presence and wry, insightful tunesmithing. Her band is conclusive proof that good songwriters never have to look hard to find good musicians.' -Lucidculture.com Karen Hudson-Sonic Bloom Roots Rock / Americana / Alt-country With the first words of "Late Bloomer," Karen Hudson declares her intent: "Kicking out some rock, making room for roots." On Sonic Bloom, Hudson digs "deep down in the dirt" to exorcise some demons and give herself permission to blossom and thrive. The musical roots go deep-and broad. This is Americana with a heavy rock foot and some gnarly guitars, for people who keep the Byrds and the Stones next to Roseanne Cash and Patsy Cline. Sonic Bloom is upbeat-even the dark songs have a wry humor. Producer Eric "Roscoe" Ambel reveals the toe-tapping heart of every number, in a production that's equal parts twang and thump. Hudson drew on sidemen from NYC's downtown roots-rock scene, including longtime collaborators Stephen B. Antonakos (Five Chinese Brothers and The Blue Chieftains) on guitar, bass player Skip Ward (whose credits include Steve Martin's Grammy-winning The Crow), drummer Tom Curiano (Garland Jeffreys), and Skip Krevens on pedal steel. Ambel also brought in drummer Kenny Soule, and contributed some of his own trademark gritty guitar vibe. The youngest child of five, raised in Long Island by a single mom, Hudson hammed it up in backyard plays and, later, sang Linda Ronstadt songs in acting auditions. She drew on years glued to her Toot-a-Loop transistor radio soaking up the sounds of Motown, Philly soul, and Top 40 hits to pen her own songs. After moving to NYC, she released two well-received discs and opened for acts like Madeline Peyroux and Pete Seeger. On Sonic Bloom, Hudson reckons with the important men in her life while firmly staking out her own territory as a grown woman. She reflects on the loss of her brother-in-law, a man Hudson had regarded as a second father, on the deceptively chipper "Dead Letter File." She summons up painful memories of her real father, in "Mama Was a Trainwreck," a sardonic rocker in a minor key, flatly stating "Daddy was a train." And when Hudson sings "My man is a rock" on "St. John's Isle," she's testifying to her love for her husband of 22 years. But no long marriage is without it's trials: Hudson revs up her honky-tonk sass to belt out a new-wave pop anthem imploring her man to "Call Me," and she sweet-talks him into reconciling on "The Better Half of Me." Temptation is examined from both sides of the equation, with the flirtatious, girl-group take of "A Woman Knows These Things," and on "Daydream," where the forbidden tastes pedal-steel sweet. In the final track, a jangly folk-rock anthem co-written with Antonakos-who plays the catchy 12-string guitar hook-Hudson celebrates "The Beauty of the Now," realizing "You don't have to work so hard, open up let down your guard ... All you gotta do is be." Hudson first conceived Sonic Bloom's songs as part of an art project she funded with grants. Financing the recording through a New York Foundation for the Arts fiscal sponsorship gave her creative freedom helped her "think about how my work affects people and continues a legacy-whether by being an activist in song, or interpreting old folk songs, or being a real middle-aged lady who sings about her dead alcoholic dad." By affirming her belief that it's never to late to claim your own creativity, Karen Hudson hopes to inspire others to nourish their own roots-and offer their own sweet blooms. -C. Adams 'Sonic Bloom' is supported by a grant from the Sparkplug Foundation, NoMAA Creative Grant Program, made possible by the JP Morgan Foundation and UMEZ and NYFA, and by the generosity of individual donors. Karen Hudson is a fiscally sponsored artist of Artspire, A program of New York Foundation for the Arts. PRESS On 'Hudson River View' Time Out NY: "...Hudson River View offers five sweet ways to look at your breaking, broken, or completely destroyed heart situation." The Village Voice: "...more the honky-tonk than the wallflower kind, though she convinces more doing her own late-Rosanne Cash-style numbers..." Bob Silvestri, Best of Western New York: "Hudson River View, the latest disc from Karen Hudson is simply her best recording to date...but the highlight here is the stunning "Hudson River Blue" one of the best songs I've ever heard."

Here's what you say about
Karen Hudson - Sonic Bloom.