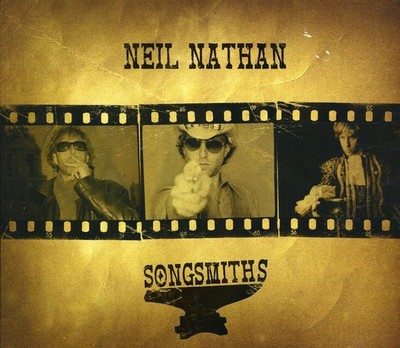 Neil Nathan Songsmiths Tracklisting 1)Do Ya (ELO) 2)Darling Friend (Beethoven and Neil Nathan) 3)I'm So Happy You Failed (Laptop) 4)Mia (Chris Malcarney of The Donuts) 5)All or Nothing (Small Faces) 6)Old Man Time (Neil Nathan and Mike 'Slo-Mo' Brenner) Sensitive singer/songwriter or glam rock animal? If you think no one can be both, you've never met Neil Nathan. The NYC-based singer and songwriter says the first two singles he ever bought were Cheap Trick's 'I Want You to Want Me' and Neil Diamond's 'Desiree.' The first may have fed his fondness for big trashy rock hooks and catchy thrashed out choruses, the latter his respect for songwriting craft and skill. Since then, he's cut his teeth in a hard rock band and as the mirror ball masked lead in the Off-Broadway rock opera, Automatic Superstar. He's also landed two mostly acoustic songs from his debut EP Glide in the indie film 'Descent,' starring Rosario Dawson. And one straight-up rocker, from the Motor City Recordings, produced by Detroit garage mainstay Bobby Harlow of The Go. Now with Songsmiths, a six-song EP of mostly covers, Nathan pays tribute to both sides of his musical heritage, covering power pop classics like ELO's 'Do Ya' in stripped down songwriter style, and treating Ludwig von Beethoven's 'Fur Elise' to a garage-surfy, Big Lebowski reinterpretation. Nathan and long-time steel guitar collaborator Mike 'Slo-Mo' Brenner (Slo-Mo, ex- of Marah, Jason Molina, and The Low Road) worked out lo-fi arrangements to songs including 'All or Nothing' by the Small Faces and 'Mia' by Chris Malcarney of the Philadelphia power pop band, The Donuts. Even the song credited to Nathan and Brenner is, in some ways, a cover. In the movie Descent, filmmaker Talia Lugacy pointed out a scene where actresses Rosario Dawson and Nicole Vicius are singing a song a capella. From this fragment, Nathan and Brenner wrote 'Old Man Time' a menacing, funk-tinged cover in a low vocal range reminiscent of Mark Lanegan. Songsmiths was released by Nathan in September, 2008, and is available through iTunes. His cover of ELO's 'Do Ya' was featured on the Showtime series Californication, and on the Season 2 Soundtrack alongside Sheryl Crow, Nick Cave, and Warren Zevon. Nathan says the best thing about the whole experience was that Jeff Lynne had to approve the song and he loved it. The two versions could hardly be more different, ELO's a huge power pop production and Nathan's nakedly acoustic.'It just speaks to how well written a song it is that my little folky, finger-picking Dylan version is still powerful, though in a totally different way,' he says. And true to form, Nathan already has another project in the wings, a full-length, garage-rocking album recorded last spring at Tempermill Studios with the Go's Bobby Harlow. Harlow brought together many of the Motor City's top rock-n-rollers, with Dean Fertita (QOTSA, Raconteurs), Kenny Tudrick (Kid Rock, Detroit Cobras), John Krautner (The Go), Joey Mazzola (Sponge, Detroit Cobras), Danny Methric (The Muggs, The Paybacks), Loretta Lucas (Sisters Lucas) and Ross Westerbur providing support. 'Wow, this is really good. Like a mellow Steve Marriott.' John Ingham Music Journalist MOJO, NME, Creem, Rolling Stone 'Melding the heartache of alt.country to the soul of acoustic Americana, Nathan's 'Glide' EP is a stirring, thoughtful collection of mini-revelations that grow in beauty with every listen.' Nevin Martell Music Journalist Filter Magazine and Author of Beck: The Art of Mutation 'I loved it. Like Chris Isaak, full of longing.' Jennifer Kelly Music Journalist Popmatters, Dusted, Neumu 'Gone (Fly Away) is catchy as hell. These songs are great.' Gary Blackwell Music Journalist Spin Magazine, Delusions of Adequecy, MotorCityRocks.com Highlights "Do Ya" off Songsmiths in Showtime's Californication, October 26th and on Season 2 Soundtrack, out in November "Glide" and "The Lucky Ones" off Glide in the film "Descent" starring Rosario Dawson "Gone (Fly Away) off Motor City Recordings in the film "Descent" starring Rosario Dawson Discography 2007 Glide EP (self-release) 2007 Motor City Recordings Single (self-release) 2008 Songsmiths EP (Pirate Vinyl) 2008 Californication Season 2 Soundtrack (Lionsgate Records) Upcoming The Distance Calls LP (tba) http://www.myspace.com/neilnathan http://www.neilnathan.com.

Here's what you say about
Neil Nathan - Songsmiths.