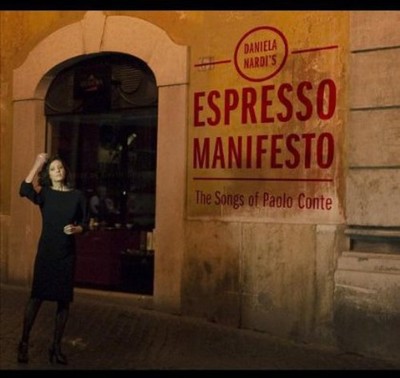 "Espresso. The ultimate symbol of all things Italian. Dark. Rich. Earthy. Complex yet effortless. Elegant yet primal. Hot. When made in the right way, the only way, it is like nothing you have ever know. This is Italy to me. If one person embodies all these elements, it's Paolo Conte. His music, his lyrics, the experience: as Italian as Espresso. This is is my manifesto, my Espresso Manifesto: to create works that proudly display the wonders of those earthy, complex, elegant, primal people, my people - the Italian people." - Daniela Nardi Although Daniela Nardi is already established as one of Canada's most celebrated homegrown artists, the self- produced Espresso Manifesto - The Songs of Paolo Conte and launch of her new world music project, marks a musical as well as personal, milestone for the award winning multi-talented singer/songwriter/multi-instrumentalist. The heartfelt set is a tribute to the legendary Italian composer/performer Paolo Conte, with Nardi exploring a dozen of Conte's classic songs. The singer's distinctive readings capture Conte's passionate essence, while unearthing new layers of emotional content and putting her own unmistakable mark on the material. Nardi matches her sublimely expressive vocals with spare, earthy jazzy instrumental arrangements, offering an evocative meeting of old-world romanticism and modernist cool. '...Daniela Nardi's Espresso Manifesto turns out to be a brilliant homage to legendary singer/songwriter Paolo Conte....' Stanley Pean, Quand le Jazz Est La'/EspaceMusique Nardi's deeply felt reworkings of such stirring vintage numbers as the plaintive, haunting tango inspired'Gioco D'Azzardo,' the beautifully bittersweet 'Nina,' the punchy, playful 'Via Con Me' and the breezy, swinging 'Gelato al Limon' offer powerful testimony to Conte's enduring genius and Nardi's singular interpretive skills. The resulting merge of composer and performer, and of cultures and sensibilities, makes for a memorable musical experience whose timeless eloquence transcends the songs' Italian lyrics. Espresso Manifesto finds Nardi, the Toronto-born daughter of Italian immigrants, stepping outside of her prior musical comfort zone to explore some adventurous new creative territory. She and her husband, renowned jazz pianist/composer Ron Davis, traveled to Italy to record the album with a studio band comprised of some of that country's most respected jazz and prestigious musicians. The album was recorded at Elettra Studios in Italy's Umbria region, was produced by Nardi, with co production from husband/pianist Davis and legendary producer/engineer Pasquale Minieri (Elisa, Vinicio Capossela, Gianmaria Testa, Francesco DeGregori). The sessions themselvves drew upon the talents of a group of top-flight players drawn from Italy's vibrant jazz community, including Dario Rosciglione (bass - Danilo Rea, Mario Biondi, Norah Jones) Fausto Mesolella (guitars - Avion Travel, Paolo Conte, Gianmaria Testa), Michele Rabbia (percussion - Stefano Battaglia), Luciano Biondini (accordion - Rita Marcotulli, Enrico Rava, Ivano Fossati) Fabrizio Bosso (trumpet - the Chris Botti of Italy), Gabriele Mirabassi (clarinet - Gianmaria Testa, Holly Cole) and Marcello DiLeonardo (drums - Stefania Rava, Battista Lean, Rosario Giuliani). '......let the album wash over you like a seductive Mediterranean wave....' - The WholeNote, Canada 'No woman had ever taken on a full record of his material before, so I was intrigued by the idea of putting a female spin on his songs,' Nardi says. 'There's such a strong male character to his songwriting, so I thought that it would be an interesting challenge to find the feminine in his work. He can be quite dark at times, he can be quite ironic however I managed to find songs where he is his most vulnerable and perhaps most emotional." The combination of Conte's remarkable songwriting and Nardi's sensitive interpretations gives Espresso Manifesto - The Songs of Paolo Conte an effortless universal appeal that transcends cultural and language barriers. Album Credits Produced by - Daniela Nardi Co-produced by - Ron Davis Recorded at Elettra Studios in Umbria, IT Additional artistic direction - Pasquale Minieri, Fausto Mesolella, Rita Marcotulli Recorded, Engineered and Mixed by - Pasquale Minieri and Sandro Marcotulli Studio Assistant - Carlo Alberto Mazza Additional Recording - Greg Kavanagh Mastered by - Antonio Baglio for Nautilus Mastering (Milan, IT) All songs written by Paolo Conte, except tracks 3 & 7 written by Paolo Conte & Vito Pallavicini. Track 12 written by Paolo Conte, Vito Pallavicini and Michele Virano.